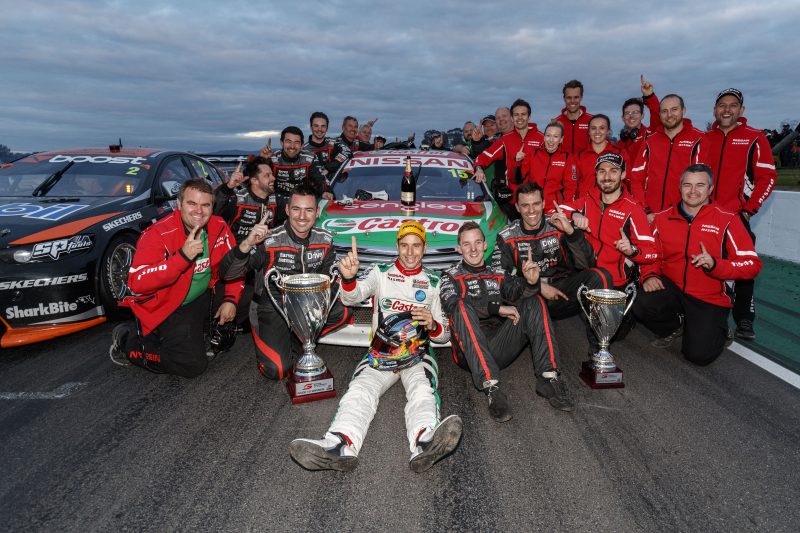 Todd Kelly has labelled Rick Kelly’s triumph in Race 13 above winning the Bathurst 1000, having come four days after Nissan announced the impending end to its support of their team.

Rick made an opportunist move past long-time race leader Scott McLaughlin when the DJR Team Penske driver slipped wide upon a restart with seven laps remaining at Winton.

He then staved off pressure from Scott Pye to take victory, his first in an Altima and just the third for the team since it became the Japanese marque’s factory squad effective the beginning of 2013.

The win came in the same week that Nissan confirmed that it would not back Kelly Racing beyond the end of the current season.

Coincidentally, it was also the scene of Nissan Motorsport’s first race win back in 2013, when James Moffat led Michael Caruso to a one-two.

Both of the Kelly brothers have tasted success in Australia’s Great Race, Rick winning the Bathurst 1000 in the family-owned Kmart Racing squad in 2003 and 2004 before Todd won the following year with Walkinshaw Racing in its Holden Racing Team guise.

Todd retired from the Virgin Australia Supercars Championship at the end of 2017 and has since increased his operational role within the team, taking some of that workload away from his brother and team co-owner.

In the wake of the Nissan announcement he has shed light on the struggles which the team has endured to try and match the field’s front-runners after Nissan became the first new manufacturer to commit to the championship under the Car of the Future regulations in 2012.

In light of that battle, and the news on Tuesday, Todd believes that today’s moment at the Winton SuperSprint is greater than the Sunday afternoon in October 2005 when he won at Mount Panorama on his 26th birthday.

“I don’t know what to say, I’m just absolutely speechless,” he said post-race.

“This is better than winning Bathurst for me (after) what we’ve been through.

“What the boys have achieved today is absolutely unbelievable; I’ll never forget it.

“It just shows the calibre of these guys here.

“You couldn’t be put in more adversity, have more distractions in the lead-up to this, and they’ve dug deep and just got the job done.

“The crew, the drivers, the management, everyone… just amazing.

“We’ve worked so hard for so long, there were times I didn’t think that work would pay off to be honest, and I’m just so glad we’ve been able to actually do this.

“To thank Nissan, Castrol, and all the sponsors that have been part of it, to be able to show them that we can actually get the job done, is a huge relief.”

Todd also heaped praise on Rick for his performance behind the wheel.

The #15 Castrol Altima had looked likely for the win once Kelly pounced on McLaughlin’s mistake, only for Pye to see off a challenge of his own from Shane van Gisbergen and apply pressure to Kelly.

“He’s been through a lot as well, to do that and keep his head screwed on…” Todd observed in his brother’s performance.

“The pressure he was under that whole race was pretty crazy and again, he just put his head down and got the job done.”

The win was Rick Kelly’s first since the Sandown sprint round in November 2011, a drought of 210 races.

He has now finished on the podium three times in the last five races, rising from 18th in the championship to 11th in that span.

Michael Caruso, who finished Race 13 sixth after running second early on, is the team’s next-best in 16th.

Andre Heimgartner is 20th in the table and Simona de Silvestro 22nd.