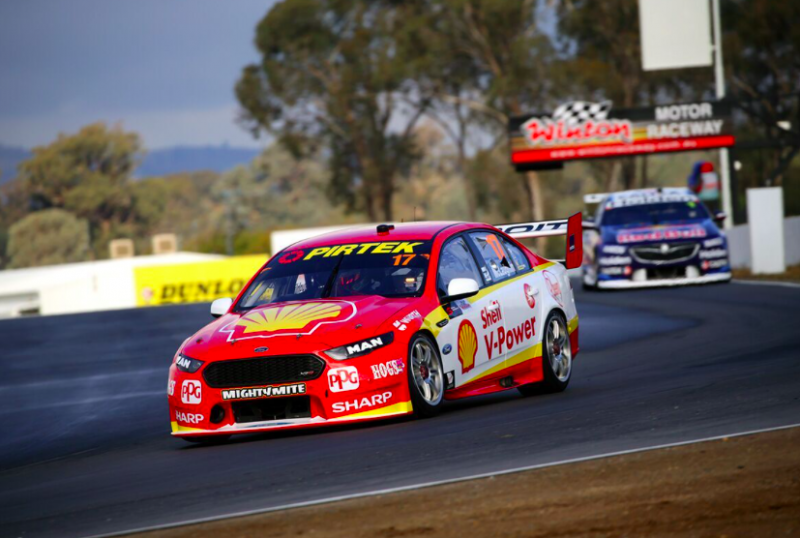 Scott McLaughlin has led Fabian Coulthard to a Shell V-Power Racing one-two in Practice 3 for the Winton SuperSprint.

Despite apparent early gremlins, McLaughlin ended up with the fastest time of the weekend, a 1:19.4601s.

Coulthard ran 0.2095s slower in the sister DJR Team Penske FGX Falcon while Friday fast man Michael Caruso was only a hundredth of a second further back in the Drive Nissan Altima.

Car #17 spent time in the garage early in the session with a vibration, and McLaughlin also took the opportunity to bed in another set of brakes.

He jumped from last to first with a 1:20.0991s during his third run just before 20 minutes in, despite his Ford appearing to be somewhat unsettled.

The car looked more compliant when McLaughlin set what would be the fastest lap of the 45-minute hit-out a little over 10 minutes before the end.

“The last set of tyres weren’t new, they didn’t feel as good as the previous session which were pre-marked,” McLaughlin revealed.

“We thought they were actually worse tyres, the ones I did my (fastest lap) on, but they were really good.

“The race car was good yesterday as well, we did that long run and then we actually didn’t run greens yesterday which was good.

“Concentrating on the quali car this morning because it was dry and we got away with that; it feels good.”

Coulthard was fourth ahead of his final run but gained two positions, and Caruso similarly improved with his final lap of the session.

Like Friday practice, Rick Kelly was again ever so slightly slower than his team-mate in the #15 Castrol Nissan Altima.

Scott Pye was the first to break into the 1:19s bracket in the #2 Mobil 1 Boost Mobile ZB Commodore and ultimately ended up fifth.

Team-mate James Courtney (#25 ZB Commodore) was a position further back in his first running of the weekend after a virus saw him hospitalised for precautionary checks the day prior.

“It was okay, I think we’ve made the car balance,” said van Gisbergen.

“On old tyres we were quite good then everyone jumped at the end and we didn’t.

“Whether our tyres weren’t good enough or I wasn’t quick enough, I don’t know. We’ll see what happens in quali when everyone is on the same tyres.”

Armor All Qualifying for Race 13 starts at 1240 local time/AEST.