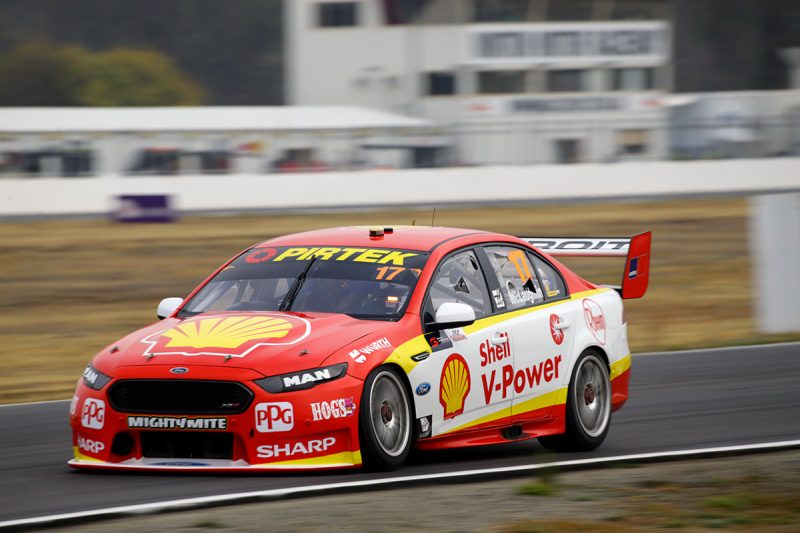 Scott McLaughlin netted his sixth Armor All pole position of the season as Shell V-Power Racing locked out the front row in qualifying for Race 13 at the Winton SuperSprint.

The championship leader leapt to the top of the timing screens with a 1:19.11s midway through the 15 minute session.

McLaughlin was unable to improve on his final run leaving him to claim pole by a tenth from team-mate Fabian Coulthard.

The Shell Fords continued their strong form having finished first and second in this morning’s Practice 3.

“I stuffed the last corner, but I’m always going to say that,” said McLaughlin.

“We think we can do better, we chase that all the time.

“My engineer in the background is always pushing me.

“(It’s) great for everyone at Shell V-Power Racing, a front row lockout, haven’t done that for a bit so it’s nice to have Fabs up there.

Scott Pye (Mobil 1 Boost Mobile Racing) was the top Holden in fifth after firing in his best time in the final minutes of the session.

He will share the third row with Brad Jones Racing’s Tim Slade, ahead of Mark Winterbottom (Tickford Racing) and Will Davison (Milwaukee Racing).

Anton de Pasquale impressed for Erebus Motorsport as the rookie claimed ninth, while team-mate David Reynolds could only manage a time good enough for 17th position.

It was the first time Reynolds has been out-qualified by his younger team-mate this year.

“My story is we’re just not fast enough,” said Reynolds.

“If I finished my second lap of that first set of tyres I think I would have been in the top ten.

“We’re still a little bit off the pace. That sucked, that sucked balls.”

The top 10 was completed by Nick Percat in the #8 Brad Jones Racing Commodore.

It proved to be a challenging session for Triple Eight as Jamie Whincup ended up 11th with the sister Red Bull Holden Racing Team Commodore driven by Shane van Gisbergen in 14th spot.

Meanwhile, Craig Lowndes will start on the penultimate row of the grid in 24th position.

“Look it is (going to be tough),” said Lowndes.

“For us, we’re only like eight tenths off pole but we’re almost at the back of the grid.

“It just shows how competitive this category is – we just couldn’t get the front to switch on.

“We went up with the rear spring at the start of the runs, looking for obviously to try and kill the rear but the rear of the car is really good.

“We’ve been working at it all weekend, unfortunately all three cars of ours aren’t not as strong as we should be or could be, so we’ve got to sit down collectively and work out how and why and make a change for the race.”

Supercars will return for Race 13 (40 laps) which is scheduled to start at 1550 local time/AEST.