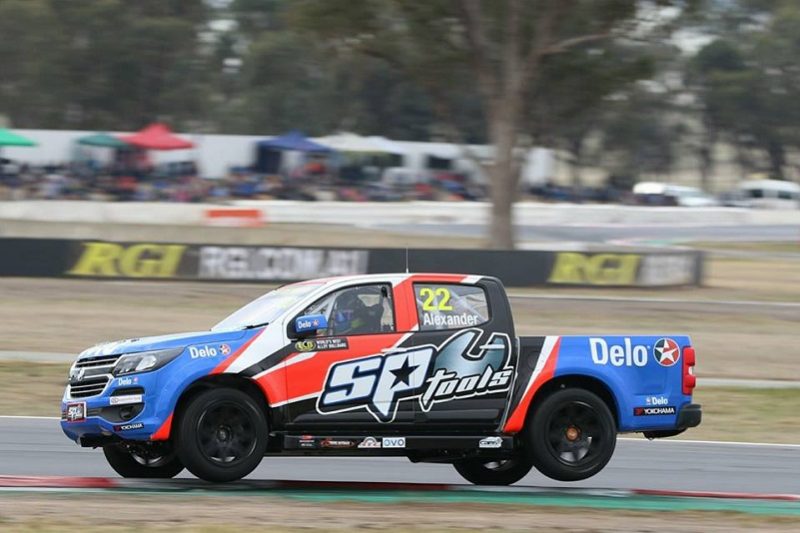 Tom Alexander has scored a second career SuperUtes race win at Winton as Ryal Harris and Craig Dontas ended up off the road on the final lap while battling for second.

Alexander had taken his first Armor All Pole Position earlier in the afternoon and led a 10-car field away at the rolling start in Race 1.

Ryal Harris in second was reportedly hampered by a leaking rear main seal which was depositing oil on his Peters Motorsport Mazda BT-50’s clutch.

The three-time V8 Utes Series winner began to come under significant pressure from Craig Dontas around halfway through the nine-lap encounter.

While Alexander drove away in the Ross Stone Racing Holden Colorado, Harris was under attack from Dontas.

He twice had to brake extremely late to prevent the Sieders Racing Team Mitsubishi Triton taking over second position at Turn 11.

On the third occasion, on Lap 9, Dontas went to the outside and when Harris attempted to respond by outbraking again there was heavy contact between the former’s right-rear wheel and the latter’s left-front.

The hit broke the Mazda’s steering and it carted both off at Turn 11, opening the door for Aaron Cameron in the sister BT-50 to pinch second, 8.7s behind winner Alexander.

Toby Price similarly assumed third in the other SRT Triton, ahead of Dontas and the wounded Harris.

Christopher Formosa did not take the start due to a mechanical issue with the Ranger Racing Ford Ranger.