Upgraded components for SuperUtes at Winton

Upgraded components for SuperUtes at Winton 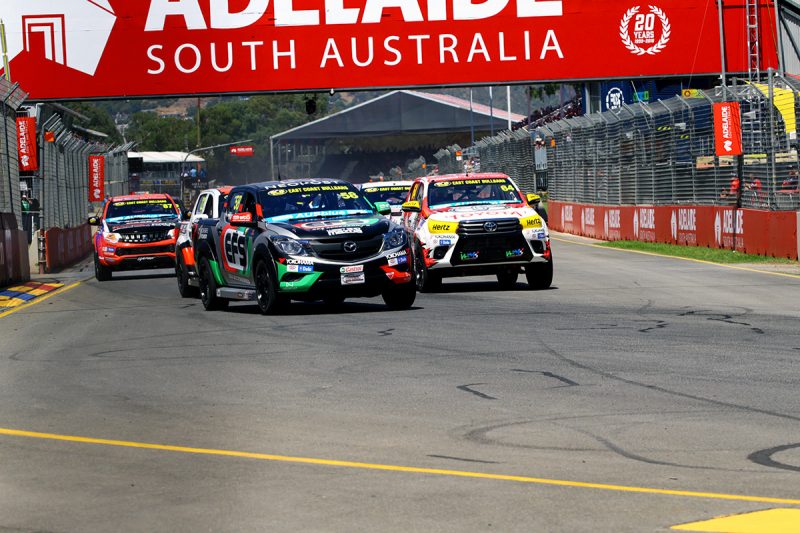 Round 1 of SuperUtes in Adelaide

The SuperUtes field will race with a number of component upgrades this weekend at the Winton SuperSprint to enhance performance and address reliability.

All cars have been fitted with new anti-rollbars and axles since Round 1 of the ECB SuperUtes Series at Adelaide on the first weekend of March, while suspension arm problems have also been addressed.

The changes have been introduced in response to reliability concerns and also to enhance the driveability of the dual cab utes.

The new anti-rollbar, which is part of the suite of control rear-end components, was trialled during the two-day test at Winton in mid-April which most teams took part in.

“Part of the development with the cars was just reviewing the set-up in them so we trialled a softer rollbar in the rear there,” category manager Kurt Sakzewski told Speedcafe.com.

“That proved to have quite good results in terms of driveability and the feel of the car so that’s now been incorporated across the whole series and they’ve got an upgraded axle in them as well.

“That was something else that we just wanted to do – spec that up a bit, get a bit more durability, longer life out of them – so those two components have been upgraded for this round and we’ve had good responses from all the teams, so that’s good to see.”

The axle change comes after Christopher Formosa’s Ford Ranger sheared through an axle early in Race 2 at Adelaide.

Sakzewski said that the Ranger’s failure was a factor in the decision but not the sole determinant.

“We were just reviewing axles overall but that was part of it,” he confirmed.

“But we were looking at the make-up of the axle that we had in there so we just identified that there was an opportunity to upspec that.

“This style of vehicle hasn’t been raced before so you’ve got different types of weights and stresses that work on all the equipment, so our review of the vehicles after that round just identified that that’s somewhere where we could actually upspec.”

Speedcafe.com understands that there were multiple rear suspension control arm failures during the recent Winton test, which led to a recall of the part.

Sakzewski verified that work had been done around suspension arms but was confident that the problem had been resolved.

“There was a little issue that was identified on some of the utes so that’s been fixed,” he said.

“That was just one of those things that happens so that’s just all been corrected now, so they’re all fine ready to go.

“They’re the same ones, no change in spec for those, but just a couple of them had to be brought back up to spec for where they needed to be.”

Craig Woods leads the series in an SRT-prepared Western Sydney Motorsport Toyota Hilux, but by virtue more so of consistency rather than outright performance having not won a race in Adelaide.

Team owner Luke Sieders placed the gain around two seconds per lap relative to the pace his cars displayed during Round 1.

“Suspension-wise, we’ve been going through the motions and trying a few different set-ups here and there,” he told Speedcafe.com.

“From when we rocked up here at the start of the test to where we are now, they’re probably two seconds quicker than what they were at Adelaide, so they’ve come a long way.

“It’s amazing the difference some of the set-ups do to the cars and how they change.

“It’s been an interesting learning curve, the drivers have really enjoyed it, and had some really positive feedback with them.”

SRT/WSM will feature an unchanged five-car line-up of Hiluxes and Mitsubishi Tritons as part of an 11-car field for this weekend’s round, which gets underway today with two 20-minute practice sessions.