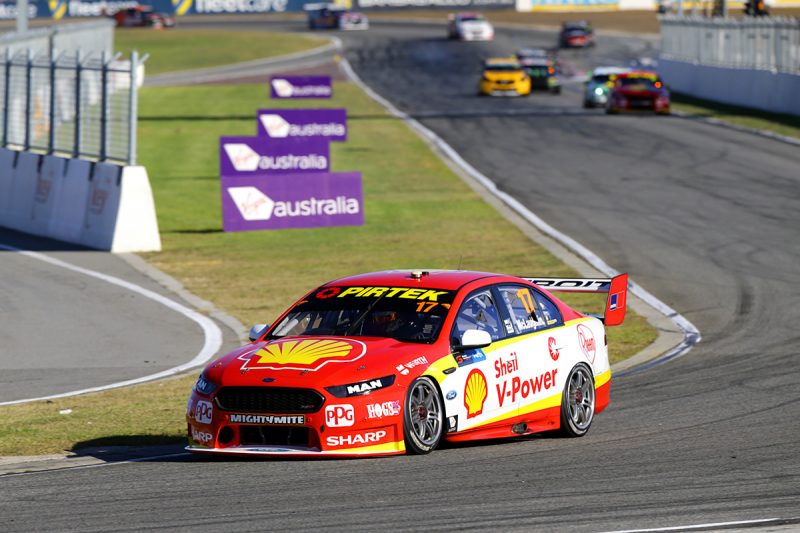 Shell V-Power Racing does not have the fastest car on the Supercars grid despite winning the last four races, according to managing director Ryan Story.

The reigning teams’ champions have come to the fore in recent weeks after Scott McLaughlin guided the #17 Shell Ford to the top step of the podium in both races at Phillip Island and Barbagallo Raceway.

McLaughlin’s wins have seen the New Zealander open up a 158 point lead in the championship, while team-mate Fabian Coulthard sits in ninth position after a frustrating start to the season.

While the team is enjoying a successful streak, Story believes his squad is not at the top of the current Supercars pecking order.

“No not by any means,” Story told Speedcafe.com, when asked if he felt his team was leading the way after its four wins on the bounce.

“We were not expecting to have the strength that we were able to show in Perth.

“I think more of that was due to some good fortune in addition to some good race craft and race management from our engineer on Scott’s side.

“We had a pretty tough time with Fabs and we are looking for both cars to bounce back at Winton.

“I don’t think we have the best car at the moment and we are working pretty hard on that.

“This is a view shared by our group that we just need to push as hard as we can to maintain the levels of competitiveness we are showing at the moment.

“We are going to every event with the aim being competitively and consistently in the top five.

“That is our starting point for everywhere we go. We are pretty conscious of the bigger picture.

“Winton is a different kettle of fish. Triple Eight were very competitive there (last year) and had their one-two.

“We are not resting on any laurels that is for sure.”

Although admitting the team’s package is not currently the best on the grid, Story has been impressed by the recent performances from McLaughlin, headlined by the come from behind win in Race 12 at Perth.

“I think that is one of the strongest performance we have seen from Scott,” Story added.

“He did everything right and the race was managed very effectively by the engineering group but he was passing cars on track as well as the team being able to help him pass cars in pit lane.

“It was a team effort.

“He is driving incredibly well and he is driving very maturely and getting it done on the track when he needs to.

“He is far more settled this year and has learned an awful lot over the past 12 months.

“It is impressive to see and it something we need to help nurture and foster.”

The Winton SuperSprint begins today with an additional driver practice at 1005 AEST.