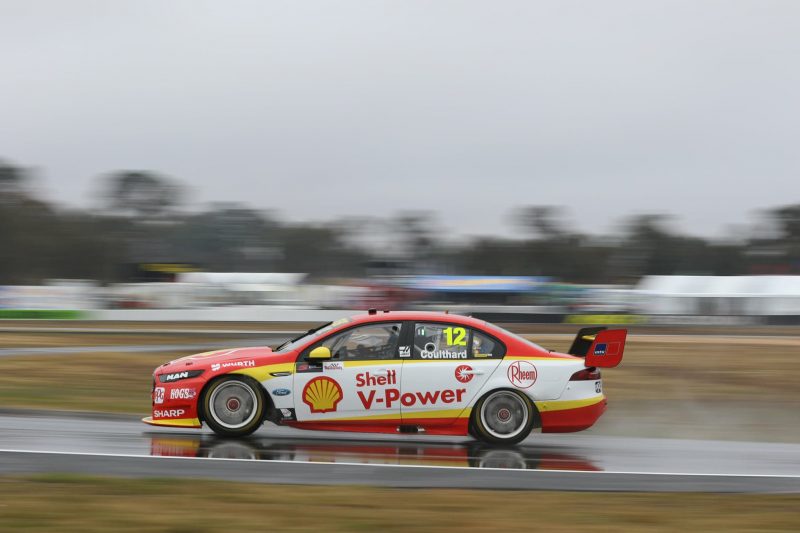 Fabian Coulthard lapped fastest in another wet practice session at the Winton SuperSprint as the Supercars Championship’s regular drivers took to the wheel for the first time this weekend.

Coulthard leapt up the order with just over five minutes remaining in the 45-minute hit-out and ultimately set a benchmark of 1:32.0341s after the chequered flag, edging Chaz Mostert.

The two Ford drivers traded the top spot multiple times in the latter stages, with the #55 Supercheap Auto FGX Falcon fastest as the chequered flag flew.

Coulthard reeled off the fastest first and second sectors on his 19th lap in the #12 Shell V-Power FGX Falcon but ultimately didn’t go quicker that time.

However, the Kiwi did go faster next time around to better Mostert by just 0.0947s.

“It was alright,” said Coulthard.

“It was slippery but it is a lot of fun. It is a good start to the weekend.

“We changed a few things but we didn’t go crazy. There is more time in working out where to be and where to place the car.

“We were a little bit off at the start but to get back in the hunt was pretty cool.”

Mostert improved on his final lap and might have even reclaimed first position from Coulthard but found traffic in the final sector.

Jamie Whincup gradually worked his way up to third in the #1 Red Bull HRT ZB Commodore, 0.3247s off the pace, and Andre Heimgartner (#7 Plus Fitness Nissan Altima) was the best Nissan runner in fourth.

Scott McLaughlin enjoyed time in first position before being shuffled back to fifth in the #17 DJR Team Penske FGX Falcon, ahead of Mark Winterbottom (#5 The Bottle-O FGX Falcon) and Rick Kelly (#15 Castrol Nissan Altima).

Shane van Gisbergen and Earl Bamber each had a run in the #97 Triple Eight ZB Commodore, with the latter clocking that entry’s best time on his final tour to be eighth-fastest.

“That was a bit unexpected,” said Bamber of his second session in the car today.

“It was a good call by Shane as he wasn’t learning much. I have got some good reference now; I love it at the minute at the moment it is great fun.”

Richie Stanaway and Simona de Silvestro rounded out the top 10.

Jack Perkins stood in for an ill James Courtney in the #25 Mobil 1 Boost Mobile ZB Commodore and finished the session 16th.

At Erebus Motorsport, Will Brown did eventually get track time in David Reynolds’ Penrite ZB Commodore, after both the team’s cars remained in the garage for the Additional Drivers session.

Brown spent time in the top 10 but ultimately got put back to 24th.

Times steadily dropped from the 1:38s range at the start of the session as a break in the rain led to a drying groove forming on the race line.

Turn 1 was a particular hotspot for drivers running off the track but the session ran uninterrupted.