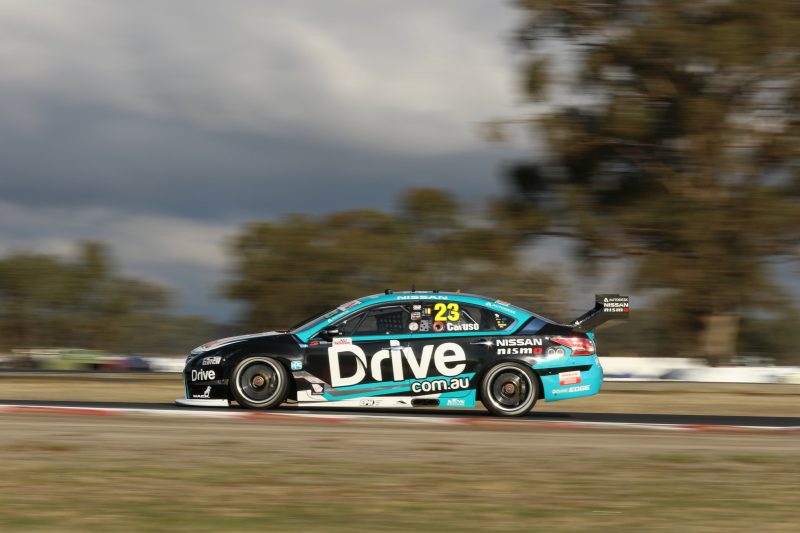 Caruso finished the 45-minute session with a best time of 1:19.7105s, just 0.0165s faster than Kelly, while Nick Percat was an even slimmer margin slower in third.

Caruso took the #23 Drive Nissan Altima to top spot just before the half-hour mark and held the mantle until the last minute when Kelly (#15 Castrol Nissan Altima) took over.

Shane van Gisbergen and then Nick Percat slotted in behind Kelly before Caruso jumped back up just seconds before the chequered flag.

“It’s still pretty slippery out there but ultimately the guys did a good job in that session to get the car to a point where I’m reasonably happy,” said Caruso.

“But it’ll be a lot faster tomorrow as the track gets a bit better, more rubber (goes down).”

Kelly, however, had mixed feelings after admitting to an error on his fastest lap.

“I’m angry at myself, the guys gave us a really good car,” he said.

“We ran a second set of tyres that were older that didn’t handle great and then they put the greens on and I got to Turn 1 and like a monkey, way too slow.

“That made me angry that I dumped that time and we did a good job for that rest of the lap.

“So clearly, if I’m dumping time like that and (finish) second the car’s very, very good.

“Today’s track condition was pretty interesting, going from wet to dry and seeing when it came on.

“So tomorrow’s a completely different day and we know Winton, the track condition changes day to day so we’ll see what tomorrow says.”

Chaz Mostert was fastest to the second sector right at the death but came across traffic and could only improve to seventh in the #55 Supercheap Auto FGX Falcon.

Percat (#8 Timken ZB Commodore), Fabian Coulthard (#12 Shell V-Power FGX Falcon), and van Gisbergen (#97 Red Bull HRT Commodore) were all within a tenth of a second of Caruso in third to fifth respectively.

Russell and van Gisbergen had similar offs at the right-hander at pit entry around the 10-minute mark, though it was unclear whether the cause was oil which may have been dropped on the track or dirt that had been carried on.

Both managed to drive into pit lane proper during what was another session uninterrupted by red flags.

There will be a further 45-minute session tomorrow at 1030 local time/AEST before Armor All Qualifying.