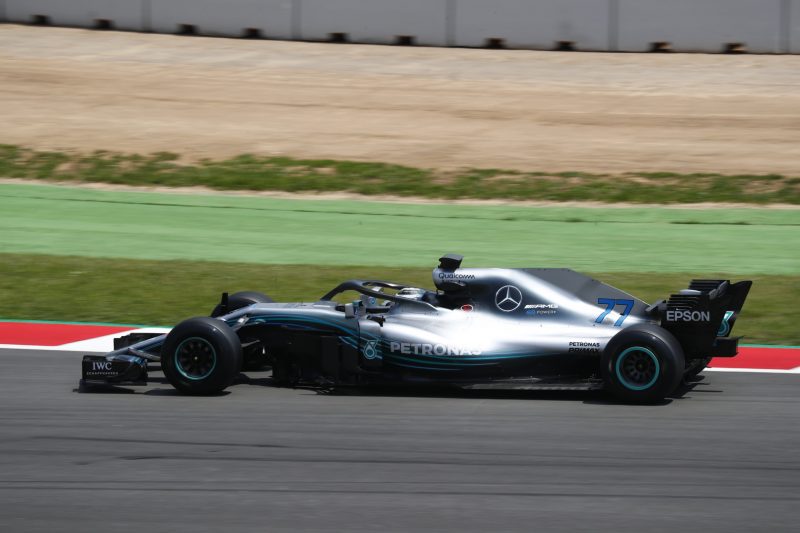 Mercedes has closed out the first in-season Formula 1 test of the season fastest courtesy of Valtteri Bottas.

The Finn set a best lap of 1:16.904 to head Ferrari development driver Antonio Giovinazzi by little more than 0.05s, both drivers completing nearly 150 laps of running.

“Today was really interesting, and we got through our program fairly smoothly,” said Bottas.

“We had a good baseline from last weekend and used it to work on different set-ups, trying out bigger changes than we normally would on a race weekend.

“We also tried to gather some information on the tyres, as we will see similarly smooth tarmac at Silverstone and Paul Ricard.

An issue with the car did see Norris stranded out on track, though the car was recovered back to the pits and was quickly back out, the team identifying a setting issue in the MCL33.

Kevin Magnussen suffered a pneumatic pressure issue in the Haas in the afternoon, which saw him in the garage for well over an hour towards the end of the day’s proceedings.

Red Bull simulator driver Jake Dennis gained his first Formula 1 experience as he took the wheel of the RB14, banking a best of 1:20.440s on medium compound tyres.

The team elected to run Dennis in an effort to provide a benchmark for the simulator work he does for the team.

“Obviously it’s a big step up from what I’m used to in GT racing but I got used to the speed and the grip quite quickly and we managed to get through the whole run plan in the end,” said Dennis.

“The morning session went pretty smoothly and then in the afternoon I managed to get quite a few laps under my belt, which was good.

“It was nice to change a few things to give me a proper representation of the difference between the simulator and real life.

“So we have a few things to work on back in Milton Keynes to help Max (Verstappen) and Daniel (Ricciardo) and make it even more realistic for them.”

Teams now head to Monaco for the next round of the F1 season, with the next in-season test scheduled for the week after the Hungarian Grand Prix in July.