Holdsworth to mark milestone at Winton

Holdsworth to mark milestone at Winton Lee Holdsworth will adopt the #400 this weekend

Lee Holdsworth will adopt a new number to mark a significant Supercars milestone at this weekend’s Winton SuperSprint.

The Preston Hire Racing driver is set to chalk up his 400th Supercars race start in Sunday’s Race 14 which will conclude the sixth round of the championship.

Holdsworth will utilise #400 this weekend to mark the occasion while his team has produced a special graphic to be displayed on the Preston Hire Racing Commodore. 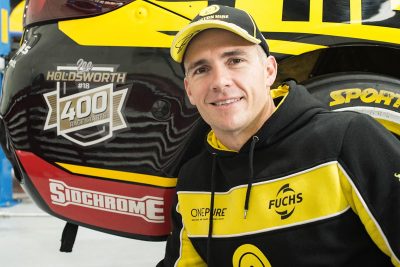 The 35-year-old made his first Supercars appearance in the 2004 enduros and has since gone on to score three race wins, with his last arriving at Winton in 2014.

Holdsworth made his full-time debut with Garry Rogers Motorsport in 2006 before moving on to Stone Brothers Racing/Erebus Motorsport in 2012 and then Charlie Schwerkolt Racing in 2015, which was initially run out of Walkinshaw Racing.

“Winton has always been a strong round for me,” said Holdsworth.

“Being my 400th start, I’m hoping we have the speed to bring home some well deserved results.”

The milestone is not the only one being celebrated this weekend with Triple Eight’s Craig Lowndes due to make his 650th race start.

Meanwhile, Holdsworth heads to Winton sitting 21st in the championship standings after finishing 23rd and 18th in the pair of races at Perth.

The Winton SuperSprint begins on Friday with an additional driver session at 1005 AEST that will see Holdsworth’s Pirtek Enduro Cup co-driver Matthew Brabham take the wheel.