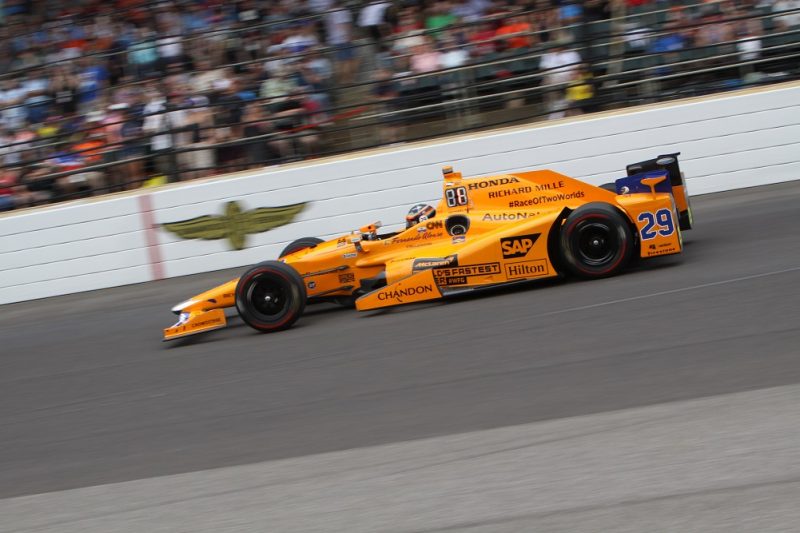 Fernando Alonso in the McLaren-Andretti car at Indianapolis last year

McLaren is looking at returning to the Verizon IndyCar Series on a full-time basis according to reports from the United States.

Representatives of the British outfit were present during the IndyCar Grand Prix round at Indianapolis last weekend and spoke with prospective IndyCar partner teams, reports Racer.com and Sports Business Daily.

A tie-up with Andretti Autosport would be an obvious option after the team ran a McLaren entry for Formula 1 driver Fernando Alonso in last year’s Indianapolis 500.

McLaren boss Zak Brown also has a link with Andretti Autosport through their connection being co-owners of the Walkinshaw Andretti United Supercars outfit.

However, Andretti Autosport already fields four cars on a full-time basis, including the Andretti-Herta with Curb-Agajanian entry which Marco Andretti drives.

It is believed that McLaren staff met with multiple teams during the visit to Indianapolis.

Brown has made no secret of his desire to take McLaren back to IndyCar at some stage after Alonso’s impressive effort at the Brickyard last year.

He stated last October that “IndyCar remains of interest to McLaren” but signalled that the team’s focus for 2018 would be on re-establishing itself as a competitive force in F1.

Alonso has nevertheless continued to expand his racing activities this year by signing on to race in every World Endurance Championship round with Toyota Gazoo Racing, starting with victory in the season-opener in Spa-Francorchamps.

The Spaniard, who last year signed a “long-term” deal of undisclosed length to stay with McLaren, also drove in January’s 24 Hours of Daytona with Brown’s United team.

The Indianapolis 500 meeting got underway with the first day of practice overnight, during which Simon Pagenaud set the pace.