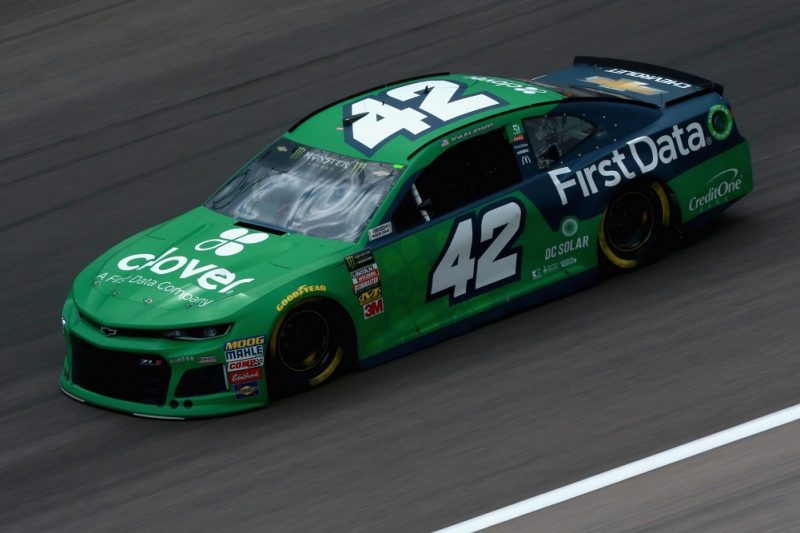 Kyle Larson has been hit with a points penalty and had his car chief suspended for a technical breach in the Kansas NASCAR Cup Series race.

Larson won Stage 2 of Saturday night’s KC Masterpiece 400 and led the most laps on his way to fourth position in the #42 Chip Ganassi Racing Chevrolet Camaro.

The result came despite being involved in a late-race incident with Ryan Blaney, who made contact which cut Larson’s left-rear tyre before the #12 Team Penske Ford hit the wall.

His car was investigated for an alleged breach regarding a failure to ensure that the rear windscreen was rigid, an issue which Larson claimed was caused by the hit from Blaney.

“I didn’t have it until after Blaney and I got together,” said Larson post-race.

“But I’ve got a ton of damage back there. These cars are pretty rigid and one piece of damage can affect the whole rest of the car.”

Officials did not accept that defence and stripped Larson of the playoff point for winning Stage 2 as well as 20 points from the drivers’ and owners’ standings.

The 25-year-old therefore drops from 10th to 11th in the standings but remains the highest placed Chevrolet driver.

Crew chief Chad Johnston was fined $50,000 and car chief David Bryant suspended from the next two points-paying races (after this weekend’s All-Star Race in Charlotte).

“We don’t believe that was the entire cause,” NASCAR’s Scott Miller told the series’ website regarding Larsons’s claim.

“I mean, there’s a possibility that it could have exacerbated the situation a little bit, but we have evidence that shows that there were things happening before that contact.”

CGR has already confirmed that it will not appeal the penalty.

“Although all parties agree that the infraction was unintentional and the result of contact, we will not appeal the penalty so that we can focus our energy on the All-Star Race and the Coca-Cola 600,” read a statement from the team.

Larson is the fifth driver to be hit with an L1-grade penalty for a rear windscreen violation in 2018, with this season’s form man Kevin Harvick issued a similar sanction after March’s Las Vegas race.

The All-Star weekend is next on the calendar at Charlotte Motor Speedway on May 18-19.