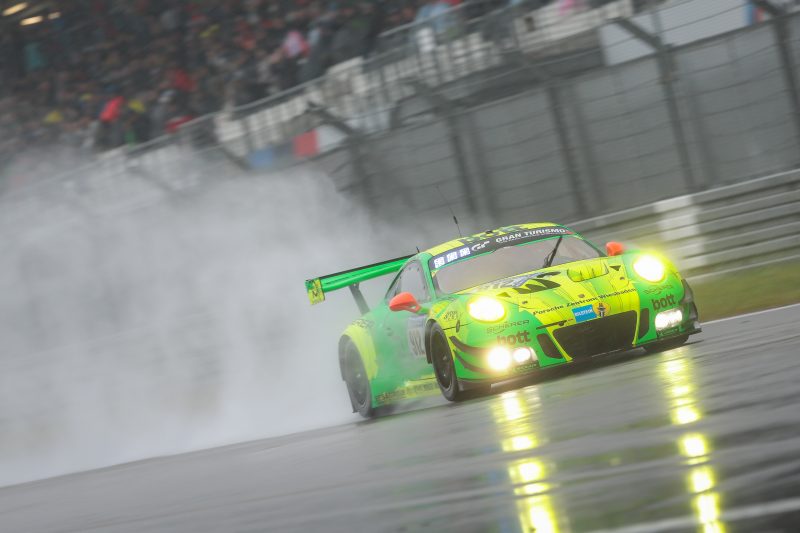 Frederic Makowiecki steered the #912 Porsche to the top step of the podium in an impressive final stint which saw the Frenchman overtake the #4 Black Falcon Mercedes of Adam Christodoulou with 70 minutes to go in treacherous conditions.

It came after a lengthy red flag period as a result of thick fog which disrupted proceedings with just under four hours remaining, before the restart came two hours later in heavy rain.

In contrast to the #912 car’s success, the sister #911 entry of Kiwi Earl Bamber, Laurens Vanthoor, Kevin Estre and Romain Dumas crashed out while leading during the night, ending a dominant run for the #911 crew in the opening segment of the race.

Black Falcon took the final two places on the podium with its #4 and #5 Mercedes-AMG GT3s. 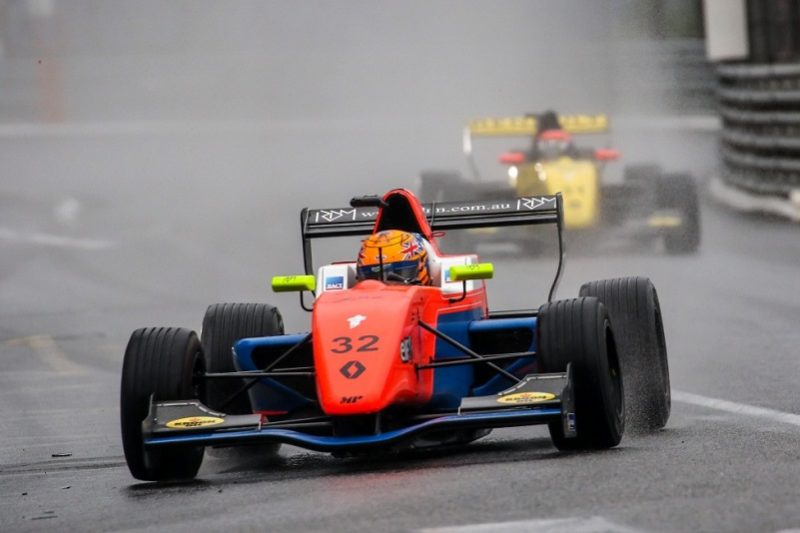 Tasmanian Alex Peroni starred in a rainy opening round of the Formula Renault Northern Eurocup at Pau.

Peroni tailed pole-sitting MP Motorsport team-mate Christian Lundgaard in Race 1 until the Dane opened the door when he slid wide on the penultimate lap.

Starting under Safety Car for Race 2, Peroni held first position all the way through but won by just 0.125s when traffic helped Lundgaard catch up late in the piece.

The start is set to be a one-off, with Peroni using it as preparation for Round 2 of Formula Renault Eurocup at Monaco on May 24-27.

“Winning this weekend was what I needed to put in stronger Eurocup performances, especially at Monaco in front of the Formula 1 teams,” he said.

“Pau is very much like Monaco, and to be competitive here against Christian, who’s leading the Eurocup, gives me the confidence to step up and challenge for podiums and wins.

“I mightn’t do any more Northern European Cup rounds due to my limited budget, but this weekend has achieved everything I hoped.” 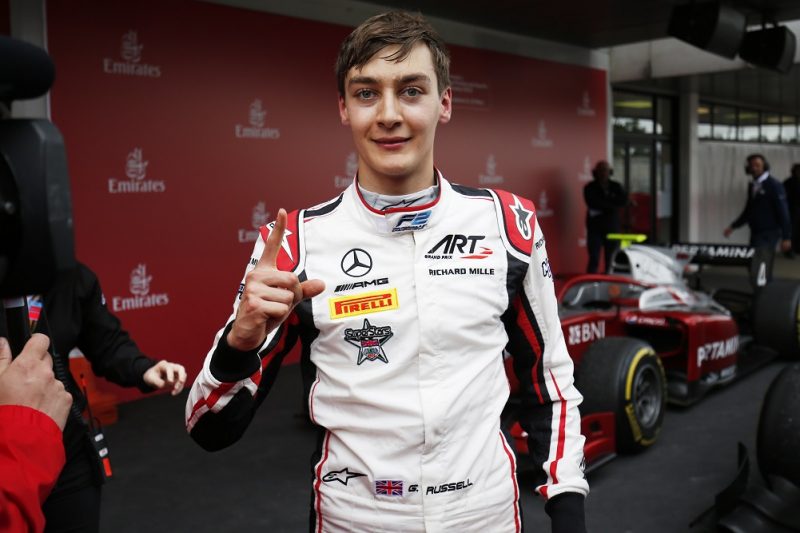 George Russell won the Feature Race and Jack Aitken the Sprint Race as the 2018 FIA Formula 2 Championship got underway in Catalunya.

Nyck de Vries led Russell off the start of the Feature but the latter slipstreamed past at the start of Lap 6.

De Vries dropped another position to Alexander Albon on Lap 10 and they ran in that order through the pit stop cycle before the Dutchman reclaimed the spot.

Russell survived an attack from de Vries after a late-race restart to take victory.

Aitken made it two wins from two for ART Grand Prix when he got the jump at the start of the Sprint and went on to win by 1.5s

Russell finished that race fourth, giving him the championship lead ahead of Round 2 in Monaco on May 24-26. 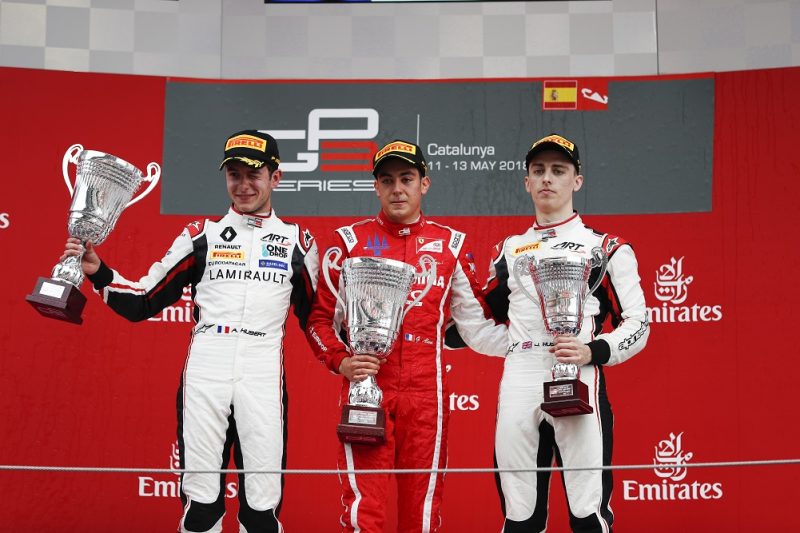 Nikita Mazepin and Giuliano Alesi each won a race in the opening round of the GP3 Series at the Spanish Grand Prix.

Mazepin moved to the front at the beginning of Race 1 after a poor start from pole-sitter Leonardo Pulcini and ultimately led home an ART Grand Prix one-two-three backed up by Anthoine Hubert and Callum Ilott.

A damp track created drama in Race 2 but Alesi (Trident), who beat pole-sitter Juan Manuel Correa to the first corner, dealt with three Safety Car restarts to win the race.

Australian Joey Mawson (Arden International) notched up finishes of 16th and 15th on debut, running as high as 11th in the latter before contact with Gabriel Aubry caused front wing damage.

Hubert’s pair of second placings means the Frenchman will take the series lead back to his home soil of Paul Ricard on June 22-24. 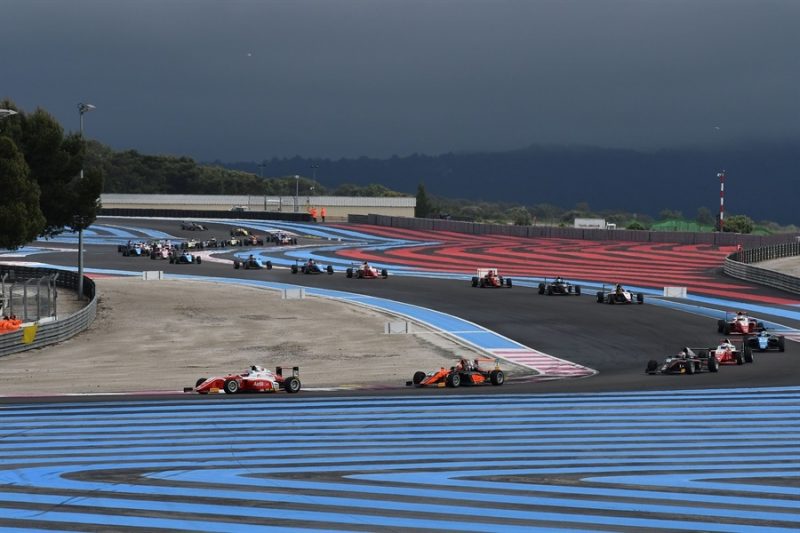 Jack Doohan was in action in the Italian Formula 4 Championship at Paul Ricard, recording results of DNF, 10th, and 12th in the three races.

Doohan ran fourth midway through Race 1 when contact from Prema team-mate Gianluca Petecof put him out of action, an incident for which the Brazilian would be issued a 10-second penalty.

Enzo Fittipaldi leads the championship, which resumes with Round 3 at Monza on June 2-3. 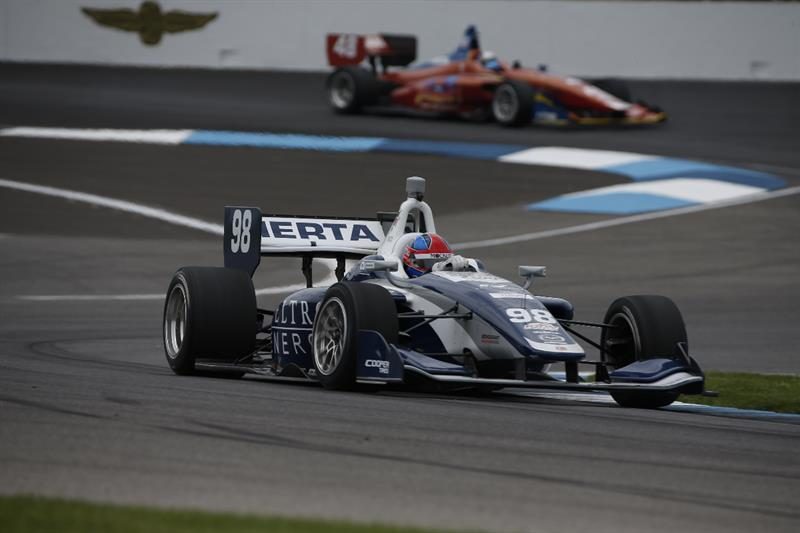 Colton Herta picked up his first and second wins of the year as he swept the third event of this year’s Indy Lights series on the Indianapolis road course.

Herta ended up off the road at the first corner of Race 1 to avoid an incident between Victor Franzoni and Pato O’Ward, but drove back from fifth to take a lead he would not relinquish just beyond halfway.

He had to work similarly hard in the second encounter after exiting the opening corners fourth in a frenetic start to the race.

Herta caught then-leader Santi Urrutia with just over three laps to go, with the latter trying to defend but spinning when they made contact.

That gave the #98 Andretti Steinbrenner Racing entry clear passage to another victory and saw Herta rise to second in the series, behind O’Ward.

The Freedom 100 is next up on the speedway on Friday May 25. 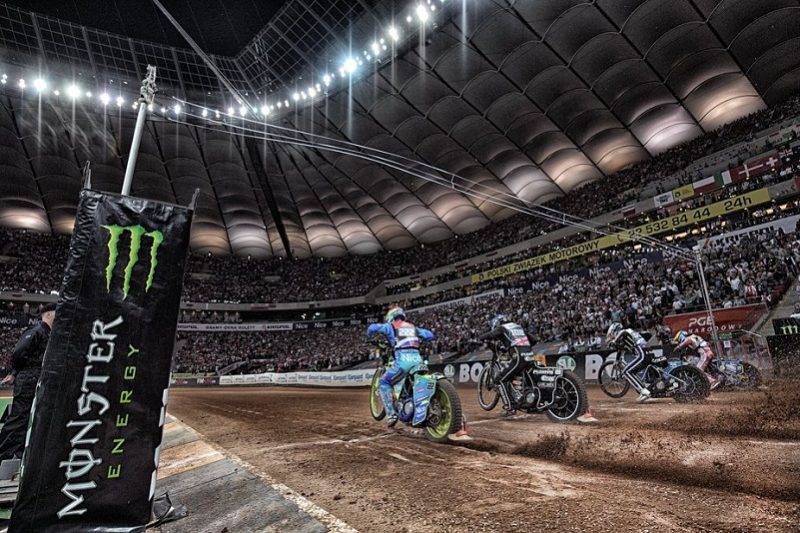 Tai Woffinden won the Final and Fredrik Lindgren left with the championship lead as Jason Doyle’s title defence got off to a lacklustre start in Warsaw.

Doyle was disqualified from Heat 1 of the night after contact with Prezemyslaw Pawlicki that saw the Pole go down, and also from Heat 12 having touched the tapes.

The Novocastrian finished his other heats second, third, and second, failing to make the Semi-Finals.

Compatriot Chris Holder won Heat 14 but finished third in Semi-Final 1, leaving him fifth in the standings.

Woffinden prevailed in a thrilling battle with Maciej Janowski in the Final.

Round 2 is in Prague on Saturday May 26. 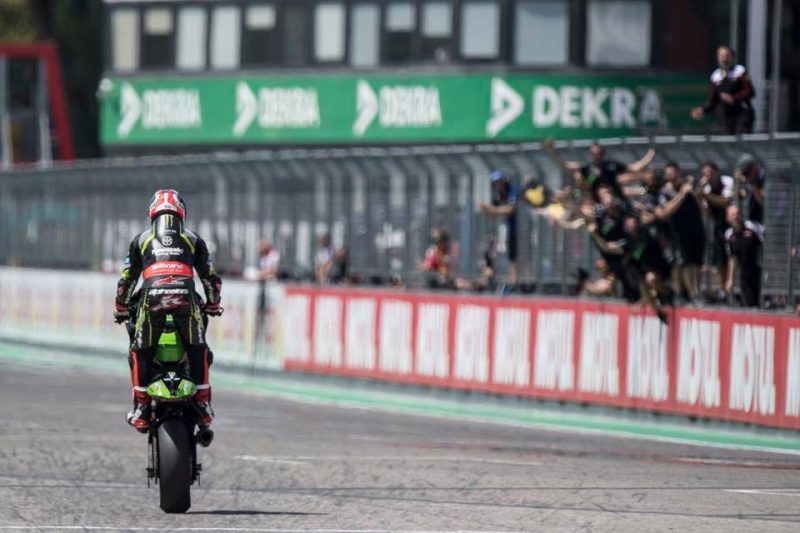 Jonathan Rea has drawn level with Carl Fogarty’s record of 59 World SBK race wins after sweeping the Imola round.

The defending world champion rode from ninth on the grid in Race 2 to run second by the end of Lap 4, behind title rival Chaz Davies (Aruba.it Ducati).

He tailed Davies for several laps before a third attempted pass came off on Lap 14, after which Rea pulled away to a 4.0s win in the five laps which remained.

Rea’s World SBK championship lead is now 47 to second-placed Davies, the equivalent of nearly a full round, with Round 6 at Donington on May 25-27. 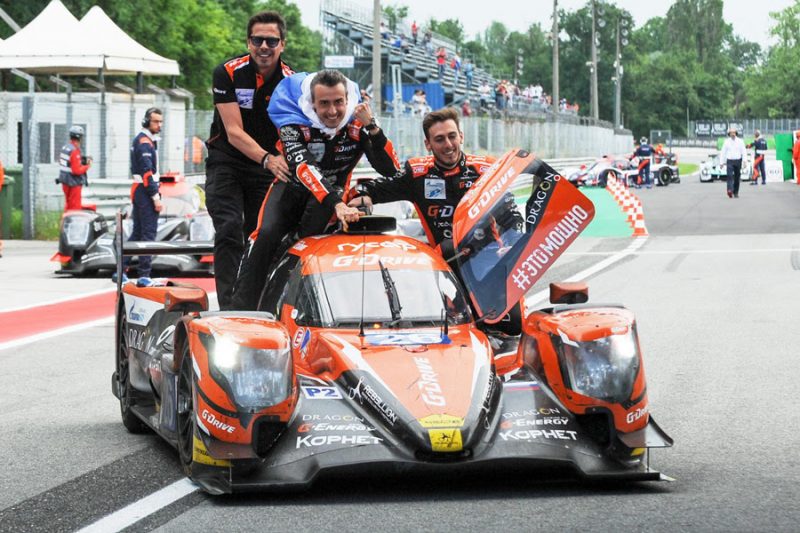 G-Drive Racing emerged victorious in the 4 Hours of Monza with thanks to its #26 Oreca of Jean-Eric Vergne, Roman Rusinov and Andrea Pizzitola.

The squad finished half a minute ahead of the #33 TDS Racing Oreca in second, with the #28 IDEC Sport Oreca rounding out the overall podium.

In GTE, the #55 Spirit of Race Ferrari 488 GTE with Matt Griffin, Duncan Cameron, and Aaron Scott took home the win after holding onto the lead in the class for a majority of the race.

A total of four Safety Car periods were needed during the race, which was marred by a number of incidents.

Australian James Allen was not classified in the second of the G-Drive Racing entries.

The European Le Mans Series gears up for Round 3 at the Red Bull Ring on July 22. 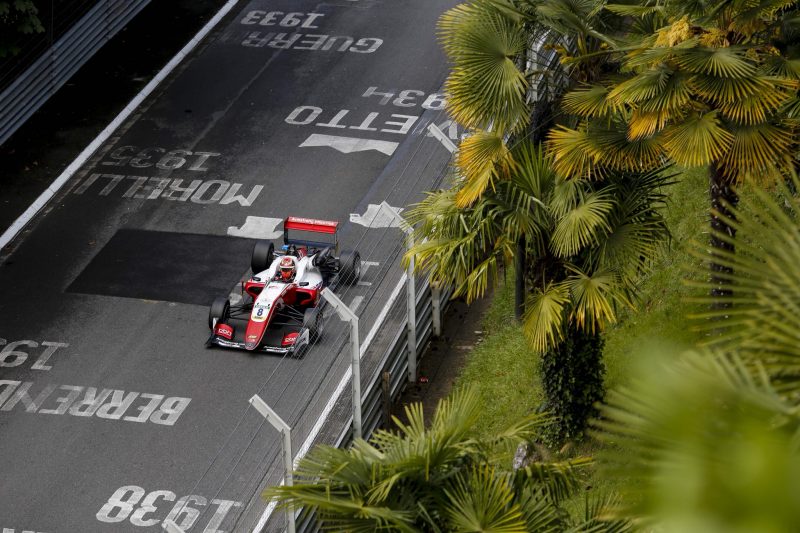 The PREMA Theodore Racing driver climbed to as high as third in Race 2 following a fifth place finish in Race 1.

In a rain-sodden final race of the weekend, however, Armstrong crashed out after colliding with another car on Lap 8 in a race that was eventually brought to an early end.

Guanyu Zhou, Sacha Fenestraz and Ralf Aron shared the respective race victories, with the next round set to take place at the Hungaroring from June 2-3. 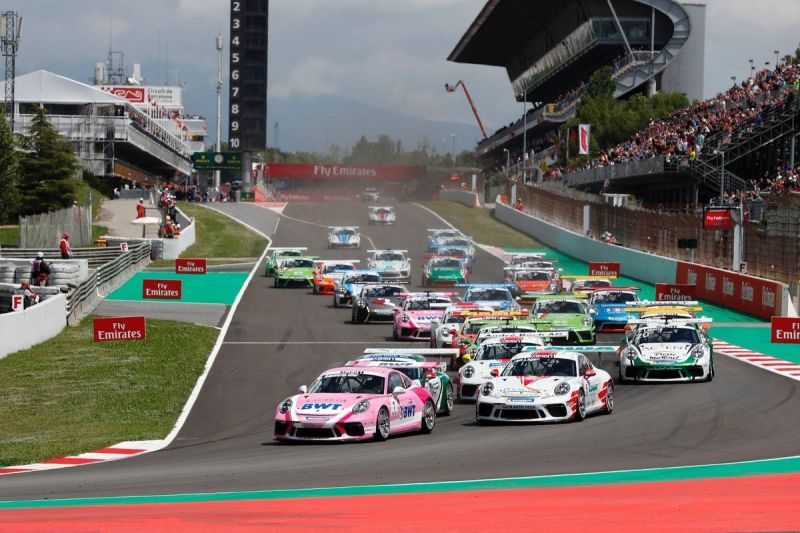 Michael Ammermüller has won Round 1 of the Porsche Mobil 1 Supercup in Barcelona.

The German qualified on pole and did not give up the lead at two Safety Car restarts, taking a 3.4s victory after 14 laps.

Jaap van Lagen held off Dylan Pereira for second position by less than two tenths of a second.

Round 2 takes place with the Monaco Grand Prix from May 24-27.