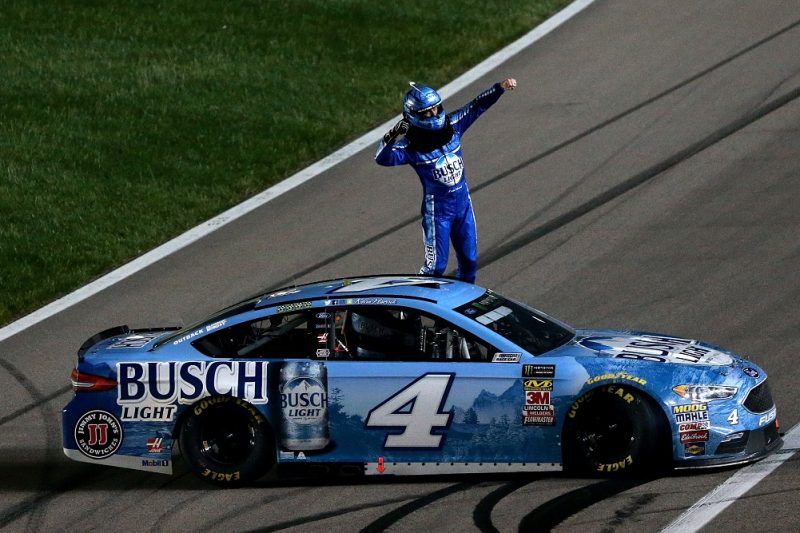 The Kevin Harvick show continued with his fifth victory of 2018 in Round 12 of the Monster Energy NASCAR Cup Series at Kansas Speedway.

Harvick was only sixth when the KC Masterpiece 400 restarted for the final time with nine laps remaining after a fiery seven-car crash.

Martin Truex Jnr led the race at that point but was rounded up the by #4 Stewart-Haas Racing Ford on the penultimate lap.

Harvick had fallen just short of winning Stage 1 when he was held out by Ryan Blaney (#12 Team Penske Ford) and also finished second in Stage 2, to Kyle Larson (#42 Chip Ganassi Racing Chevrolet).

He was prominent throughout the final stage before dropping a handful of positions with a four-tyre pit stop during the penultimate Caution with just over 15 laps remaining.

It wasn’t enough, however, to deny the 42-year-old a second straight win.

Truex Jnr got his second podium of the year in the #78 Furniture Row Racing Toyota, while Joey Logano rounded out the top three.

Logano had led late on when he did not pit during the second-last Caution, caused when Blaney hit Larson and then the wall, but the #22 Team Penske Ford was passed by Truex Jnr on the next green lap.

William Byron extricated himself from his wrecked #24 Hendrick Motorsports Chevrolet after a heavy hit in the crash which caused the final Caution.

Byron got loose and tagged Clint Bowyer on his way to hitting the wall all but head-on, before landing on top of Ryan Newman’s #31 Richard Childress Racing Chevrolet.

Bowyer still managed to take the #14 Stewart-Haas Racing Ford to 15th at the chequered flag.

The All-Star weekend is next up at Charlotte Motor Speedway on May 18-19 (local time).