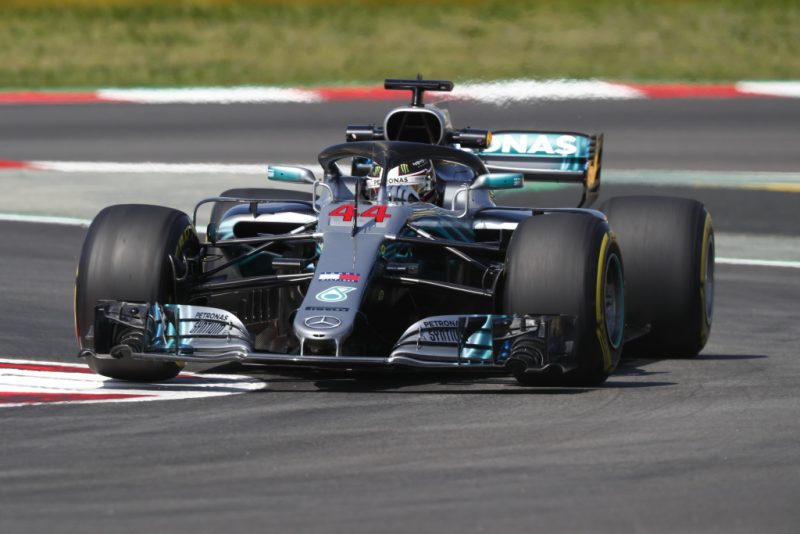 The reigning world champion claimed his 74th career pole with an impressive 1:16.173s effort set on his final run in Q3.

Hamilton had put down a marker after the first run but went on to shave another three tenths from his benchmark to claim pole from team-mate Valtteri Bottas.

Bottas pushed Hamilton hard ending up just 0.040s shy of his opposite number.

“I need this pole, I have not had one for a while,” said Hamilton.

Ferrari locked out the second row with Sebastian Vettel third ahead of team-mate Kimi Raikkonen, having opted to fit softs instead of the faster supersoft tyres for their final runs.

“I’m very happy with that lap to be honest. The car was good, a bit of understeer, but I gave it all I could,” said Vettel.

Red Bull set a strong pace after the first runs with Max Verstappen second and Daniel Ricciardo third, but the pair slid back to fifth and sixth after their final flying laps.

The pair were more than 0.6s adrift of Hamilton.

“I didn’t really know what to expect,” said Ricciardo.

“We never really know until qualifying. In Q3 I think we (myself and Max Verstappen) both put in a strong lap on the supersofts which wasn’t our preferred tyre.

“I thought we were more comfortable on the softs so that is why I went for that in the second part of Q3.

“They (Mercedes and Ferrari) put in some belters at the end. It is a little bit disheartening because I don’t really know what more I could have done.

“I thought we would be a couple of tenths from pole but it is six or seven, so that gap is not so nice.”

McLaren’s Stoffel Vandoorne will start 11th after narrowly missing out on Q3.

Renault’s Nico Hulkenberg made a surprise exit in Q1 after he was placed in the elimination zone following a late effort from Force India’s Ocon.

The German will start from 16th alongside Sauber’s Marcus Ericsson.

Williams continued to struggle with Sergey Sirotkin and Lance Stroll failing to progress from Q1.

Stroll will head up the penultimate row of the grid after his session ended in the barriers with an unusual spin on the exit of Turn 12 as the first segment of qualifying came to a close. Sirotkin ended the session in 17th although a three-place grid penalty for an incident during the Azerbaijan Grand Prix will see him start from the final row.

He will share that with Toro Rosso’s Brendon Hartley, who failed to make qualifying after severely damaging his car following a big shunt at Turn 9 in Practice 3.

The Kiwi escaped unscathed but will need to accrue a special dispensation to start Sunday’s race.

“I can feel it in my head and neck a little bit. It was a big impact but everyone is working hard to get the car ready for tomorrow,” said Hartley.

The Spanish Grand Prix is scheduled to begin at 2310 AEST.