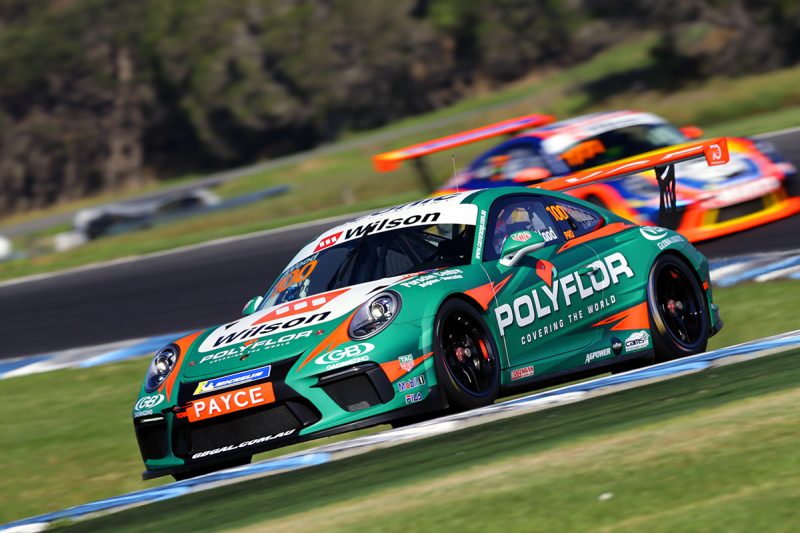 Dale Wood has admitted that the early success he’s enjoyed in the Porsche Wilson Security Carrera Cup Australia series has silenced the self-doubt he’d experienced towards the end of his Supercars career.

“For me, it probably answered a few questions for me,” Wood told Speedcafe.com when asked about his feelings since joining the Carrera Cup field.

“Over the time, and not having quite the results I would have liked in Supercars, you start to have some self-doubt and some question marks hanging over some areas on how well you can go.

“So then to come into this and to be going as well as we are going, I suppose it installs some confidence back into myself and maybe answers a few questions to me in a sense that I can still do this; I can do the job if I’m given the right opportunity.”

Wood currently lies second in the Carrera Cup standings behind Jaxon Evans, having won four of the season’s seven races.

For the moment, Wood is satisfied where he’s landed and isn’t thinking beyond the current season.

“It’s a silly thing to say but it’s going better than I perhaps thought it might have. So that’s awesome.

“My sights are now firmly on trying to win the championship.

“We’re not leading the championship due to, I made some mistakes at Adelaide and we got unlucky in that last race at Melbourne Grand Prix, otherwise I think we would be leading it.

“We’ll keep our head down and bum up do that and then what comes after this I don’t really know.”

Wood admits that, already, the season has left him with a different frame of mind to that with which he left Supercars.

“I’ve probably found myself happier now than what I’ve been in quite a few years in racing,” he added.

“I’m really enjoying that, and that comes down to a lot of things. It’s got a lot to do with the team that I’m with now and all that.

“I’m just far happier in myself and with what I’m doing.

“I definitely would like to do Carrera Cup at least another year after this and just really see where things go and see what opportunities come up, I guess.”

Carrera Cup next heads to Hidden Valley where it will run at the CrownBet Darwin Triple Crown on June 15-17.