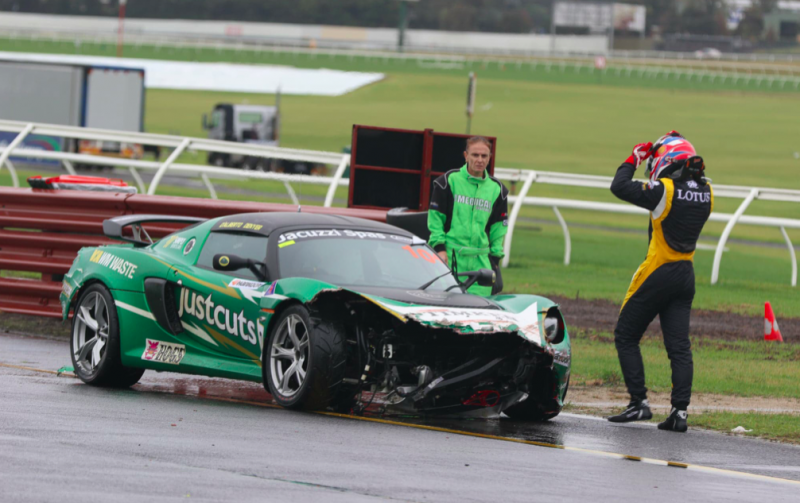 A crash during practice at Sandown has ruled Tony D’Alberto and Grant Denyer out of this weekend’s season-opening Australian Production Car series event.

The Lotus Exige collided with the Holden Commodore of Richard Baskis, and while both drivers escaped the incident unharmed, neither car will take any further part in the weekend. “Basically the conditions with the weather is horrendous and I was travelling down the straight and hit a puddle and aquaplaned, and I was a passenger from there on,” D’Alberto said.

“There wasn’t a lot to it other than hitting that puddle, which I didn’t think was very big to be honest but maybe because these cars are a lot lighter than what I am used to…it just took off on me.

“It is very disappointing for everyone involved to have that incident. Unfortunately you have those days in motorsport and I certainly wasn’t trying to take any risks, it was just the circumstances of the track condition.”

D’Alberto and Denyer were set to join up for the first time since they raced together in Australian GT with Maranello Motorsport in 2015.

A record 48-car field, the largest Australian Production Car series has ever assembled, was initially released.

That number has since dropped to 45 cars with the withdrawal of the Denyer/D’Alberto Lotus and the Commodore Baskis was set to share with Ross Donaldson, and the scratching of Mark McHenry’s and Jason Cutts’ Mitsubishi Evo.

The Australian Production Car series is at Sandown with Round 2 of the Shannons Nationals, with four races over the course of the weekend.