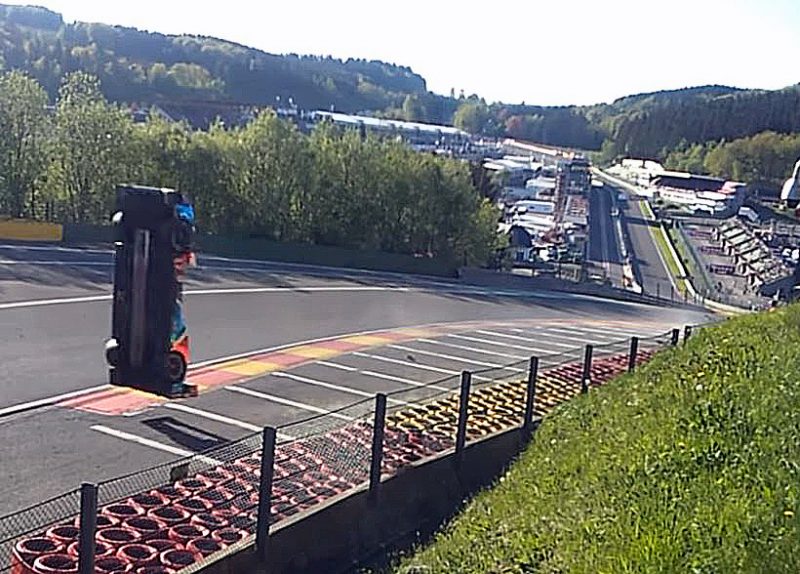 Missed by television cameras as it happened, spectator footage has since been posted on YouTube showing the car becoming airborne as it exited Eau Rouge and approached Radillon at the top of the hill.

At the time it was rumoured that the car had become airbone, performing two backflips before colliding with the barrier at the exit of Radillion, near the Kemmel Straight.

Though unclear exactly how or why the car lifted off, the incident looks similar to those suffered by Peter Dumbreck and Mark Webber at Le Mans in 1999.

Isaakyan’s crash was the second for a BR Engineering BR1 at that location over the course of the weekend, with Pietro Fittipaldi having gone off heavily during qualifying.

The Brazilian sustained a broken left leg and a fractured right ankle in the crash, which look likely to rule him out of the Indianapolis 500 later this month.

While the Fittipaldi DragonSpeed entry did not start the race, Isaakyan’s SMP Racing entry completed almost five hours of the six hour event.

Isaakyan, who suffered no serious injuries in the incident, was the race’s second retirement, the first a result of the Ford Chip Ganassi Team UK which also crashed at Eau Rouge.

Driven by Harry Tincknell at the time, the #67 entry left the track shortly after the one hour mark, crashing at the same spot as Fittipaldi had in qualifying.