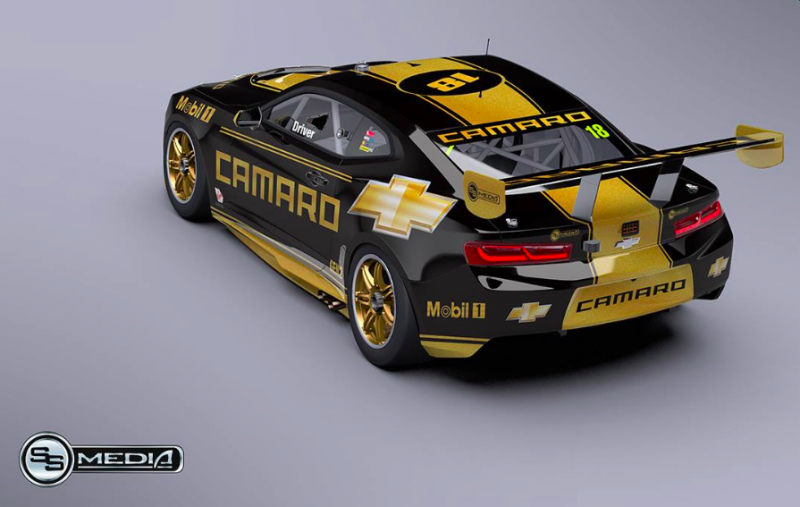 A render of what a Camaro Supercar could look like pic: ssMedia

Holden Special Vehicles (HSV) plans to conduct a thorough evaluation of the Chevrolet Camaro before electing whether or not to press forward with any plans to develop a version to compete in Supercars.

The Camaro has emerged as a possible candidate to join Australia’s premier series following confirmation that its natural rival the Ford Mustang will become the first two door coupe to race in the championship next year, in accordance with Gen2 rules.

Speculation has further heightened after Holden announced it will not stand in the way of any plans for the Camaro to join Supercars, therefore welcoming the car to go up against fellow General Motors model, Holden’s recently developed ZB Commodore.

HSV, an automotive company owned by the Walkinshaw family, has been heavily linked to the Camaro with the company striking a deal with GM and Holden to import and sell right-hand drive versions of the road car in Australia from July.

The company’s boss Tim Jackson confirmed that a feasibility study into developing a Supercars Camaro is underway, as reported by the Supercars official website.

However, he stresses that the firm is merely assessing the option at this stage and will only make a call once a thorough detailed analysis of such a project has been undertaken.

The study will include the physics of whether a Camaro body will fit on the control Supercars chassis, cost, its marketing benefit and whether it is an “effective” and “competitive” option.

“We want to make sure that we go in with our eyes wide open and understand the feasibility, cost and the issues you are going to encounter, so that is what we have to look at first, before anybody assumes there will be a Camaro in the Supercars field,” Jackson told Speedcafe.com.

“First of all you have to understand whether the current configuration for the Supercar actually fits the (Camaro) shape.

“That is the starting point and then you have to put the work in to see if it is going to be an effective and competitive product.

“We are looking at it now and we started that process since Holden has made its statement.

“We don’t really have a timeline on it but I have seen comments on social media, so we can see there is an element of enthusiasm about it.

“It is critical we know what we are getting into before we charge off in another direction.

“Racing it has a logic to it so if Holden is open to racing it then we should be looking at how to do that.”

Jackson says evaluating the costs required to homologate and develop a Camaro and its marketing benefit will be a key part of the feasibility study.

“My understanding is that it (homolgating a car) is a costly process so it is not something we can decide at the drop of a hat and that is not what we are going to do,” he added.

“We need to understand what the cost is and what the marketing benefit of going racing in that product looks like.

“We need to talk to the relevant stakeholders before making a decision but clearly there is a bit of excitement around it.”

While HSV is owned by the Walkinshaw Andretti United Supercars team co-owner Ryan Walkinshaw, the squad is remaining tight lipped regarding the possibility of a Camaro entering the category in the future.

However, the former Holden factory team said that it would be well placed should be required to homologate a new Supercar if the situation arises.