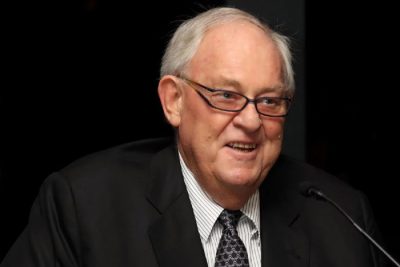 Born in Melbourne, Warwick was an astute businessman who also held an unrivalled passion for motorsport.

Adept in business as founder of the successful global Warwick Fabrics firm, he was also a handy driver in his own right.

However, he soon found more enjoyment in helping aspiring young drivers reach their potential in the sport, becoming a financial backer to a crop of young stars.

Warwick was one of the key influences in setting up the Australian Motor Sport Foundation (AMSF) in 2001, later rebranded the CAMS Foundation, alongside chairman Geoff Morgan.

The foundation helps fund talented young drivers in their bid to rise up the professional ranks in the sport.

Warwick was later recognised for his work in 2015 with a CAMS Membership of Honour award for his work with the CAMS Foundation, where he remained a Director until 2015.

One of the first drivers to receive his help was former Supercars full-timer Cameron McConville with Warwick’s assistance successfully guiding a then aspiring rookie through the ranks to Supercars.

“He was massive for my career,” McConville told Speedcafe.com.

“After I had my crash at Bathurst in 1993 I was struggling two years later to get a full-time drive and I met Tom while I was a driving instructor for Jim Murcott.

“He would often tell the story about how he put me in the gravel at Turn 1 when I was sat next to him in a car which always raised a few laughs.

“He sponsored me in a small way for Bathurst in 1994 and 1995 and a month later he said, ‘I’m buying you a race car to competing in GT Production for 1996,’ and we won the championship.

“That got me a drive with the Audi team in Super Touring. When I tested for them I was going up against a couple of guys with money and I wasn’t going to get the drive and Tom stepped up.

“When he was adamant that I need to go to Europe he opened up a meeting with Jeff Kennett, the Victorian Premier at the time.

“He was very well connected; the co-drive (alongside Craig Lowndes) at the Holden Racing Team in 1999 was done through Tom.

“I genuinely owe my career, in addition to my father, to Tom.

“I guess I was the first he helped and there would be at least 15 or 20 guys behind me.”

Warwick later founded the PODIUM program with Morgan in 2016 which has helped rising star Joey Mawson progress through Europe, winning the German Formula 4 title in 2016, before graduating to FIA European F3 and now GP3.

He was due to head to Barcelona this weekend to support Sydney driver Mawson at his maiden GP3 event in Spain.

Mawson says he will be forever indebted to Warwick for his support over the last five years.

“This morning I was saddened to receive news that one of PODIUM’s founders Tom Warwick has passed away,” read a social media post from Mawson.

“I will be forever indebted to the support that Tom has given me over the past five years.

“Without the support of him and Geoff Morgan through the CAMS Foundation and PODIUM, I don’t think I would have had the opportunity to progress my career past karting and into cars.

“Tom taught me a lot over this time and always had faith in my ability, but was never one to be in the spotlight.

“At the start of this year he was the driving force behind me moving to the GP3 Series, and I don’t think that I’ve ever seen him so excited about the year ahead.

“It is so sad to know that he won’t be able to enjoy the journey with us in the future, but the foundation he helped lay for me to follow my dream is there to build on and I fully intend on repaying the faith he showed in me.

“Since hearing the news it has been extremely tough but I know that he would want me to focus on the job at hand.

“With that in mind, I’ll be putting all of my efforts into achieving a good result for him at this weekend’s opening round in Barcelona.

“My thoughts are with Tom’s wife Robyn and the family along with Tom’s friends at this time.”

Tributes have flowed from across the Australian motorsport fraternity.

Alan Jones, 1980 Formula 1 world champion, said Warwick was passionate about motorsport and helping young talent including his son Christian Jones, who went on to win the 2004 Asian F3 Championship.

“Tom was a very generous man and loved his motorsport and helped a lot of your guys along the way including my son Christian,” Jones told Speedcafe.com.

“He was a lovely bloke that loved his motorsport and I wish there was more of him.”

“We have been best mates over 30 years and cars was our passion, but helping young people was something we both believed in and we put a lot of our money and time,” Morgan told Speedcafe.com.

“We were both chairs of the Australian Motor Sport Foundation and we created PODIUM together all with the aim of helping young people and particularly people who don’t have the money.

“He was extremely proud, always immaculately dressed, it is just such a sad thing.

“He loved driving but he made a decision to support people. A more generous man you could not find, he was very big man with a very big heart.

“Without things like PODIUM where do these kids go? We will make PODIUM into a legacy for him.”

Triple Eight boss Roland Dane also paid tribute to Warwick and the importance of people like him in helping drivers forge careers.

“He has helped a number of drivers over the years to further their careers in Europe,” Dane told Speedcafe.com

“Right now I’m sure as Joey Mawson goes into his first GP3 race this weekend his thoughts will be turning towards how Tom has helped him and Tom will be wishing him all the best from wherever he is now.

“Benefactors and people who are prepared to back them are few and far between, and have done a great job for a number of young drivers over the years.”

“The CAMS Foundation is certainly grateful for Tom’s enormous generosity over many years, and he will forever leave a legacy in Australian motor sport.”