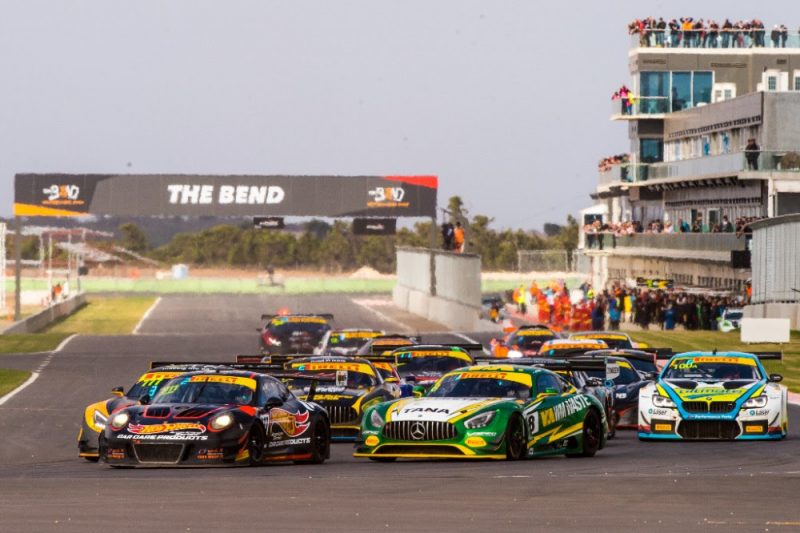 Australian GT during Round 2 at The Bend

A 29-car field including five GT4 cars is set to take to Sandown for Round 3 of the CAMS Australian GT Championship this weekend.

The absence of championship leaders Max Twigg and Tony D’Alberto presents Liam Talbot, currently two points behind, a big opportunity to move to the top of the table in his Porsche 911 GT3-R.

Emery’s old car was recently bought by Aussie Driver Search and will be raced in the hands of Round 1 winner and Australian GT rookie Jaie Robson, who drove a Mercedes-AMG GT3 at Albert Park and The Bend.

“The Mercedes has been great for Jaie and ADS however with us purchasing our own Audi R8 LMS, it made sense for Jaie to race the Audi,” ADS founder Kyle Austin.

“We plan to utilise the Audi as much as possible in Aus GT and our events.”

There will nevertheless be three Mercedes-AMG GT3s in the field, including one driven by Peter Hackett, who is currently third in the championship.

A further three points back in the standings is Fraser Ross, he and Tony Quinn each piloting a McLaren 650S.

In the Lamborghini ranks, Glen Wood moves back into a GT3 to partner Dean Koutsoumidis in an R-EX, while Jim Manolios steers a Huracan.

Peter Edwards is entered in a Ferrari 458 and the BMW Team SRM M6 will be driven by Steven Richards and European Le Mans Series race class winner Ricky Capo.

In addition to the 15 Championship class GT3 cars are nine Trophy class cars and five GT4s.

Round 3 of Australian, at Shannons Nationals, will be contested over three 40-minute races, with practice on Friday May 11.