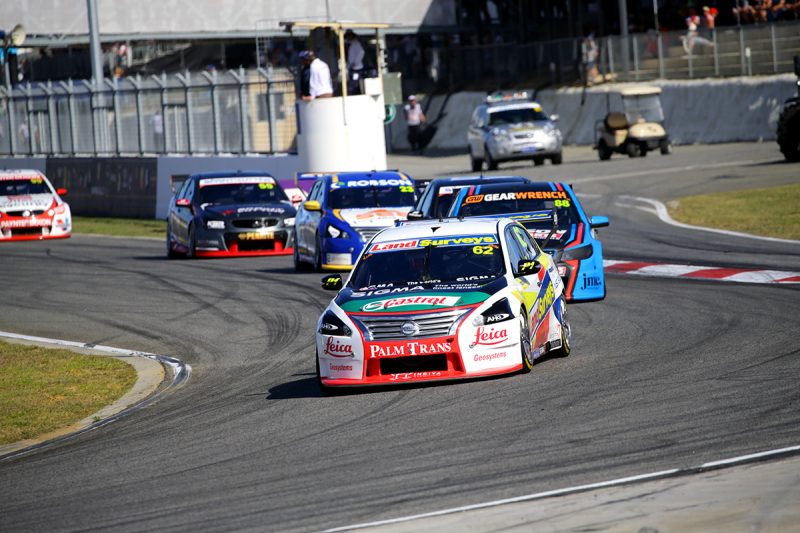 Alex Rullo has hailed his first race win in the Dunlop Super2 Series as ‘insane’ having stepped back into the second tier of Supercars after a tumultuous 2017.

At his home track of Barbagallo Raceway, Rullo took the MW Motorsport Nissan Altima which carries his trademark #62 to victory in the opening race of Round 3 of the series.

The 17-year-old had given himself the best possible chance to do so by achieving what was also a maiden Armor All Pole Position earlier in the morning on the Saturday in question.

Rullo held that advantage off the start line and saw off early pressure from 2012 Bathurst 1000 and two-time Super2 series winner Paul Dumbrell, who made two errors chasing the youngster, to lead all 26 laps.

His best race result in either the current Super2 season or his first in 2016 had been fifth in Race 3 at Symmons Plains four weeks prior.

Rullo had, however, qualified fourth-fastest in the first round of 2018 at Adelaide only to be excluded from the session for a parc ferme infringement.

The West Australian made history as a 14-year-old race and round winner in the Kumho Tyre Australian V8 Touring Car Series in 2015, also with MW Motorsport, before stepping into Super2 with Lucas Dumbrell Motorsport in 2016.

He debuted in the Virgin Australia Supercars Championship last year initially with special Superlicence dispensation, but endured a tumultuous season with the struggling LDM and was dropped two events before it ended.

Having experienced so much before he turns 18 next month, Rullo was almost at a loss to explain how he felt about winning for the first time at Supercars level and doing so at home.

“To do it here’s just crazy,” he told Speedcafe.com.

“I guess it’s been a dream of mine this year to get a win on the board and to do it here and pole and the race win, it’s insane, I don’t know how to describe it. (I was) a bit shocked on that last lap.

“It’s been cool, I feel like I’ve been waiting for ages, I’m only 17 still, so it’s crazy what’s gone on in the last few years and how I got here.

“(I’m) just thankful to everyone involved and everyone that’s got me here.”

Rullo only had one top 20 finish to his name last year, 15th in the Supercheap Auto Bathurst 1000 with Alex Davison.

He says that being back in Super2 with one of the series’ leading teams allows him to demonstrate his credentials.

“I learned heaps, but we didn’t have the performance to sort of show it.

“I think now we’re in a good car this year and back in the DVS it’s a good opportunity for me to prove myself, so I think that’s what we’ve done this weekend and hopefully we can keep it up.”

Rullo finished sixth from seventh on the grid in Race 2, but ran off on the first green flag lap while leading Race 3 in tricky conditions and ultimately took the chequered flag in ninth position.

He moved up one position to seventh in the series, 264 points behind leader Dumbrell, ahead of Round 4 at the Watpac Townsville 400 on July 6-8.