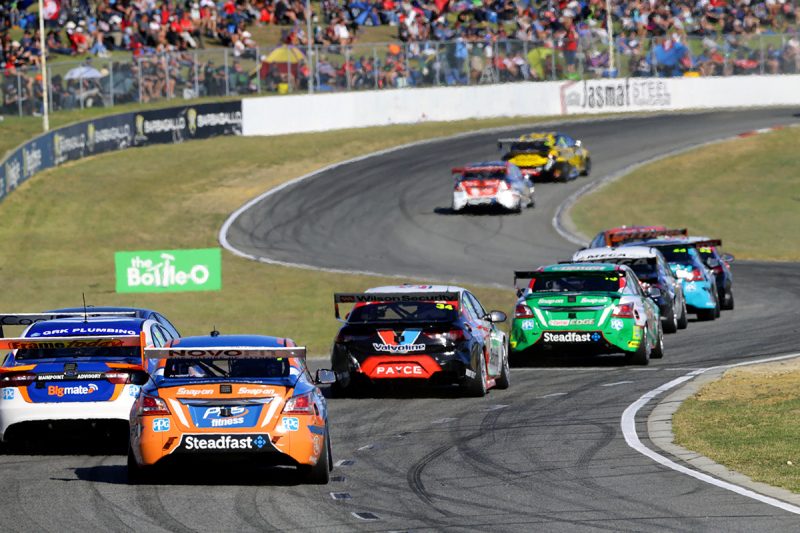 The Supercars Commission will review the new-multi part qualifying system later this month to ascertain if it should be implemented at further SuperSprint rounds.

Championship organisers developed a new format to be used primarily at the shortest circuits on the calendar, namely Symmons Plains (2.41km) and Barbagallo Raceway (2.42km) to ease congestion.

Last weekend saw its final trial in Perth where it again proved to be a huge hit among fans as the knockout style qualifying mixed up the grid, with a number of big names forced to start from unfamiliar positions.

Red Bull Holden Racing Team’s Shane van Gisbergen and Jamie Whincup missed out on the top 10 for Race 11, while the Shell V-Power Racing Falcons started 17th (Fabian Coulthard) and 19th (Scott McLaughlin) for Race 12, that was won by the latter.

The three-part system sees no more than 16 cars on track at one time while putting more emphasis on practice, which now effectively becomes part of qualifying.

The fastest 10 drivers from combined Friday Practice receive a bye to a 10 minute Q2 session where they are joined by the top six from Q1, also 10 minutes in length.

A top 10 is formed in Q2 before these runners battle for pole position in a final Q3 outing.

On Sundays, another practice session in the morning determines the split of cars for Q1 and Q2 of qualifying for the afternoon’s 200km race.

The new qualifying format is among topics to be discussed by the Supercars Commission where a positive vote from members could see the knockout system introduced at other SuperSprint rounds this year.

“The Commission agreed to trial this format at Symmons Plains and Barbagallo Raceway and I think the fan feedback has been overwhelmingly supportive of it,” Shane Howard, Supercars Chief Operating Officer told Speedcafe.com.

“It has really mixed things up and it is certainly very exciting so from this it will go back to the Commission and they will review it and may consider to extend it into other rounds going forward.

“I think it is well suited to the sprint rounds,” he added, when asked which events the format could be used.

A recent Speedcafe.com poll saw more than 90 percent of the vote declare their support for the format to be used at more championship rounds.

Coulthard, who was one of the surprise names to fall in the first Q1 session on Sunday, believes it is a good addition for shorter tracks where traffic in qualifying is an issue.

“It works for you some days, some days it doesn’t,” Coulthard told Speedcafe.com of the new qualifying format.

“Either way, my decision is not going to make a difference, so, whatever the powers that be make and say then that’s what we do.

“I think it works on the shorter tracks, definitely trying to fit 26 cars on a sub one minute lap track is difficult.

“I think for these types of circuits it works but for a longer type of circuit there’s enough space for us to sort of work ourselves out.”

Mobil 1 Boost Mobile Racing general manager Mathew Nilsson is a fan of the format and would like to see it return in the future.

“I like it. It mixes it up and it challenges you,” Nilsson told Speedcafe.com.

“It is something different and we are always looking to spice the sport up and I think Sunday showed that.

“It caught quite a few people out and I think it makes the racing better as some people are out of position, so I think it is good.

“I think the credit has to go to Supercars for coming up with something that makes you think a bit more about tyre strategy for the weekend.”

Supercars has previously employed a knockout qualifying system from 2007-2009 when it adopted a three-part system that followed Formula 1’s format.