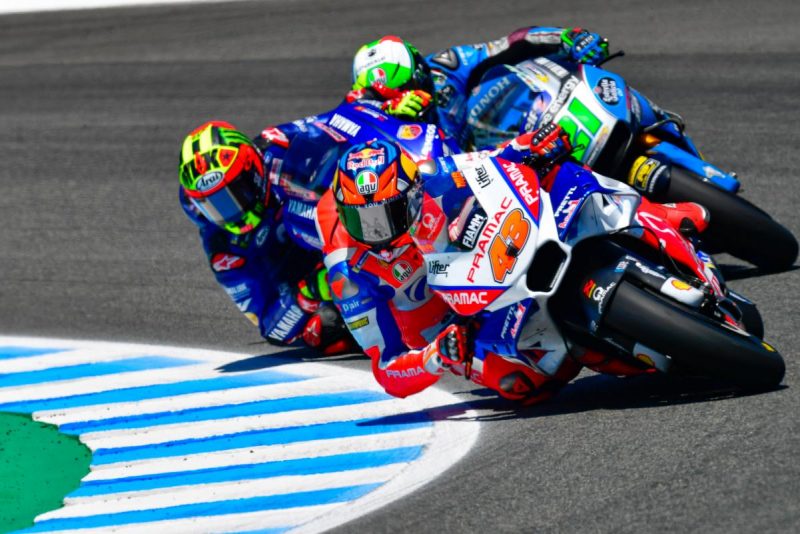 Jack Miller says that he is meeting his goals with sixth in the Spanish MotoGP his seventh straight top 10 dating back to last season.

Miller ran in ninth through the middle third of the 25-lap race in Jerez before gaining three positions when Jorge Lorenzo, Andrea Dovizioso, and Dani Pedrosa spectacularly crashed into each other.

Sixth became fifth when the Queenslander passed Valentino Rossi on Lap 20 before the veteran re-passed with two laps remaining.

Miller has now finished 10th, fourth, ninth, and sixth this season, putting him eighth in the championship and 34 points behind leader Marc Marquez.

The 23-year-old is also confident that he can keep up that form.

“That’s four top 10s out of four for me now this season and I’m still top 10 in the championship,” Miller noted in his Red Bull column.

“(That) was definitely the goal coming in this year after just missing (the top 10) last year, and being with a new team and all of that.

“Seems to me that it’s realistic to stay there, too. All weekend at Jerez I felt good, my injuries from before Austin didn’t bother me and I had really consistent pace at a track that probably doesn’t suit our bike and definitely hasn’t suited me in the past. That’s a really good sign.”

Miller ultimately finished two positions behind Pramac Ducati team-mate Danilo Petrucci, who rides a current-spec Desmosedici while the Queenslander is on a GP17, and less than 10 seconds away from winner Marquez.

The result may have been something of a missed opportunity given the one-time MotoGP race winner qualified only 12th and made a poor start, but Miller was still pleased with his overall performance.

“I can’t help wondering what would have happened if I’d qualified better, and definitely if I’d started better, I had a bit of a shocker,” he recounted.

“I fell down to 16th at one stage on the first lap, so to pass a heap of guys and work my way though, that was pretty satisfying.

“In the end, I was three places off the podium, but just 1.5 seconds behind (Andrea) Iannone who finished third, so that’s a bit frustrating.

“That 1.5 seconds to someone who started five places ahead of me … yeah, frustrating. But only a little bit.

“Nine seconds off the victory, that makes me happy because it shows we’re making improvements.”

Miller and the rest of the field is testing at Jerez today before Round 5 in France on May 18-20.