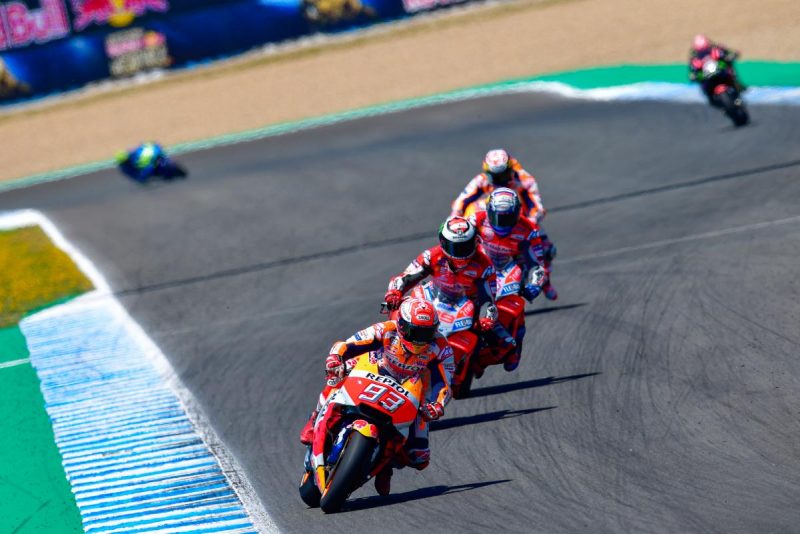 Marc Marquez has won the Spanish MotoGP as Jorge Lorenzo, Andrea Dovizioso, and Dani Pedrosa crashed together while battling for second.

Marquez looked to already have the race sewn up but a spectacular moment with seven-and-a-half laps remaining made sure of that when Lorenzo and Pedrosa came together and skittled each other and Dovizioso.

The crash handed unlikely podiums to Johann Zarco and Andrea Iannone, and a sixth position to Jack Miller, while Marquez now takes over the championship lead.

Lorenzo made a storming start from the inside of the front row and headed Pedrosa, Zarco, lap record-breaking pole-sitter Cal Crutchlow, and Marquez through the opening corners.

The defending champion was making light work of the task ahead before bravely firing his Repsol Honda down the inside of team-mate Pedrosa at the Criville Corner to take over second position in Lap 3 of 25.

Lorenzo, Marquez, and Pedrosa remained tight until the former had a moment at Criville on Lap 8, presenting a relatively easy pass for #93 two corners later.

The contest allowed Dovizioso, by then fourth, to catch up and he soon passed Pedrosa.

However, the Italian could find no way past factory Ducati team-mate Lorenzo, handing a break to Marquez.

The leader had a heart-stopper at Criville on Lap 13 when he came across dust sprayed onto the track in an earlier crash for Thomas Luthi (Marc VDS Honda).

Marquez left a huge liquorice mark as his Honda broke into a slide which the 25-year-old somehow saved.

The champ gets loose on gravel kicked up on the circuit!#SpanishGP pic.twitter.com/T15Q8V3aD0

Pedrosa and Dovizioso quickly swapped and swapped back third position after #04 tried to fashion a move on #99, just as Marquez raised eyebrows again in rolling out the fastest lap of the race on Lap 16. 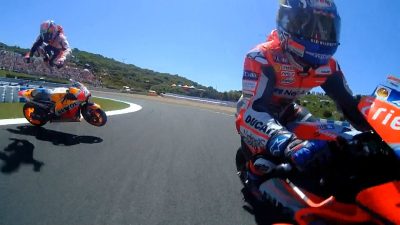 The fight for second ignited two laps later at Dry Sack when Dovizioso got down the inside of Lorenzo but ran deep.

Lorenzo attempted to cut back on a tight exit but Pedrosa had already filled the space.

They hit, causing Pedrosa a second sickening highside in three races and Lorenzo to take out his team-mate by the front wheel.

Pedrosa staggered to his feet while Dovizioso remonstrated with Lorenzo.

Race Direction announced that the incident was under investigation but would declare no further action to be taken shortly after the finish.

Zarco inherited second position, six seconds off the lead, and had a lonely run home on his Tech3 Yamaha.

Danilo Petrucci (Pramac Ducati) and Iannone duelled for what had become a podium position, the latter ultimately prevailing on his Suzuki Ecstar entry.

Crutchlow (LCR Honda) succumbed to the greasy Jerez surface while running fourth on Lap 8 and continued little further, while Suzuki Ecstar’s Alex Rins crashed out for the third time in just four races this year.