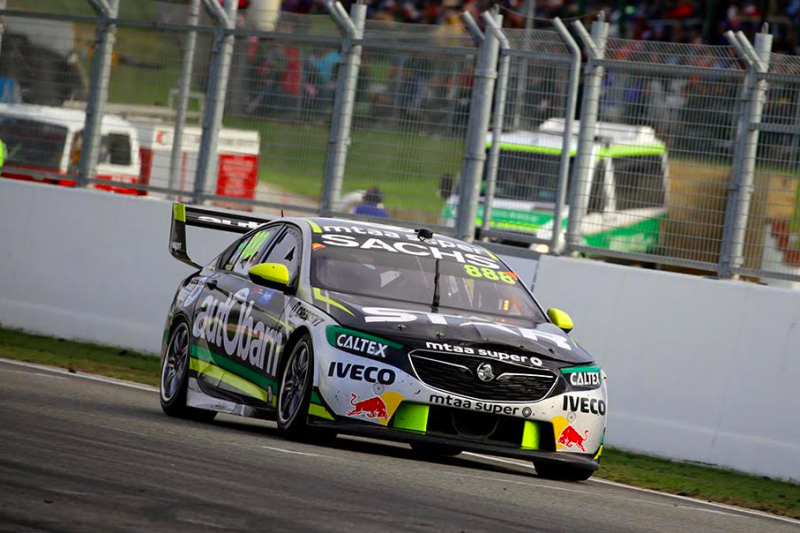 Craig Lowndes admits scoring a podium from the back of the grid was way beyond his expectations following a stunning drive through the field in Race 12 at Barbagallo Raceway.

The Triple Eight driver once again showed his prowess at the Perth circuit, where he has cultivated 16 Supercars race wins, by scything his way from 25th to claim the final place on the podium.

After failing to progress from Q1, Lowndes felt a top 10 was the best he could hope for in the 83 lap race.

However, a combination of a slick three stop strategy and an ability to extend stint lengths by preserving rubber while producing a strong pace, saw him march to the front.

The result arrived despite having to double stack behnd Tekno Autosports’ Jack Le Brocq in the opening laps when a Safety Car triggered a flurry of action in the pits.

“No (we didn’t think a podium was on the cards),” said Lowndes.

“Basically, Irish (engineer John McGregor) and I talked about it, we had that same situation here last year where we had an electrical issue driving out of the pits.

“But we started the day 18th and we got to eighth so we were hoping to be back inside the 10 if we could, and that was our goal.

“I said to Irish before I jumped into the car; ‘I’ll drive the wheels off it, you call the shots and let’s see where we end up’.

“To be honest the car was really good. Looked after its tyres, we had a green set of tyres for that second stint.

“We didn’t get to Q2 so really for us that was our gun deal, so our longest stint of the four, and of course our last stint was our shortest, which meant we could push hard, get past a couple of people.

“Then when I saw I was coming off the top of the hill and I saw Dave (Reynolds, who was second) ) go through the sand trap I wasn’t sure if he was going to come out the other end.”

The result continues a strong run of form that has seen the three-time series champion score three podiums (including a race win) in the last six races, and has finished in the top 10 in nine of the 12 races this season.

The upturn in performances after one of his worst seasons last year has Lowndes believing he is a championship contender as he sits fourth in the standings.

While he is enjoying the return to the front of the grid, the 43-year-old has praised his team’s effort behind the scenes following the difficult campaign in 2017.

“They (the team) work damned hard to get the cars rolling out every weekend, and the only way we can pay them back is in results,” he added.

“Today we went into the race already not thinking that we could get a podium but definitely to get back for points. Whenever you have a bad day you’ve just got to minimise the damage.”