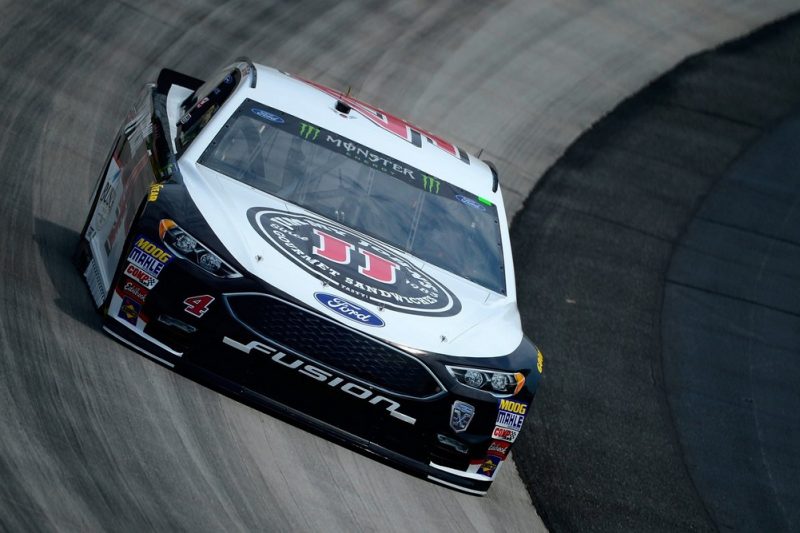 Kevin Harvick has taken a thorough victory in the AAA 400 Drive for Autism at Dover on a strong day for Stewart-Haas Racing.

Harvick won all three stages and lead just over half the 400 laps in the #4 Stewart-Haas Racing Ford to come home 7.450s ahead of team-mate Clint Bowyer (#14 Ford), while Daniel Suarez (#19 Joe Gibbs Racing Toyota) was third.

He lost the lead to Brad Keselowski (#2 Team Penske Ford) partway through but regained it in time for the end of Stage 1, when Keselowski began to run out of fuel.

Harvick again fell behind Keselowski midway through the second stage upon a restart after a Derrike Cope (#99 StarCom Racing Chevrolet) crash.

As he did before, Harvick reclaimed first position on-track and went on to beat Keselowski to the end of the stage by over three seconds.

Harvick also led off at the start of the final stage, though the order was shuffled somewhat when the driveshaft fell out of Kyle Busch’s #18 Joe Gibbs Racing Toyota and prompted a Caution on Lap 273.

Bowyer passed Keselowski on Lap 285 then led for the first time when he got by Stenhouse Jnr on Lap 296.

He still led when a Caution and then a red flag came for rain, lasting 41 minutes, and was first off pit lane from Harvick and Martin Truex Jnr (#78 Furniture Row Racing Toyota) to take the restart on Lap 326.

Harvick wasn’t to be denied, however, making the decisive pass on Lap 338 and running away with proceedings thereafter to notch up a fourth win of 2018.

Suarez had been fourth at the final restart and soon passed Truex Jnr, while behind them Kurt Busch (#41 Ford) made it three SHR cars in the top five.

Rounding out the top 10 were Keselowski, Denny Hamlin (#11 Joe Gibbs Racing Toyota), Ryan Blaney (#12 Team Penske Ford), and the first of the Chevrolets in Jimmie Johnson (#48 Hendrick Motorsports) and Larson.

Despite his first DNF of the season, Kyle Busch takes the Monster Energy NASCAR Cup Series lead to Kansas Speedway for Round 12, the KC Masterpiece 400, on May 11-12 (local time).