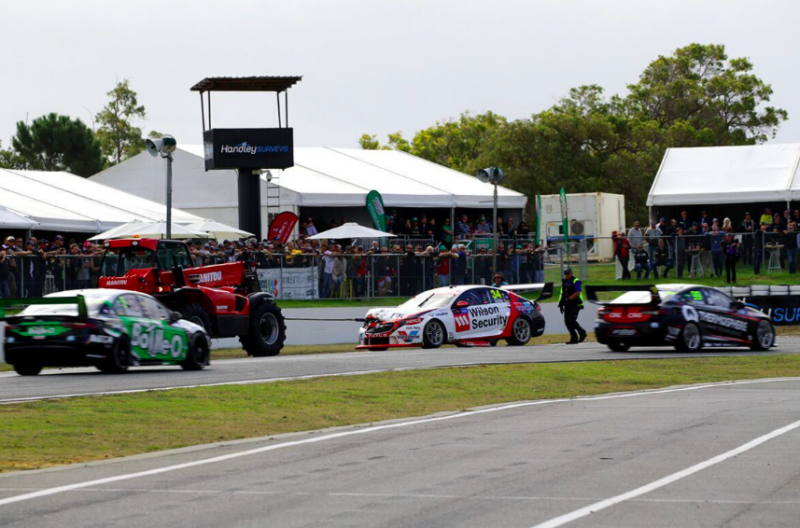 The incidnent which triggered the Safety Car was among those investigated

Supercars stewards have elected not to issue any penalties following an incident packed Race 12 at Barbagallo Raceway.

Officials reviewed five incidents from the race before deciding that there had been no breach of rules.

“During the Race a request for investigation was received from WAU Racing into an Incident involving Car #2, Scott Pye, and Car #56, Richie Stanaway, at Turn 5 on Lap 1,” read the Stewards report on the matter.

“Following a post-race review of the Judicial Camera footage from Cars #2, #5, #12, #21, #34 and #56 by the DRD, on the available evidence no Driver was wholly or predominately to blame for the Incident.”

Stanaway had felt another driver had triggered the clash after contact with the rear of his Falcon.

“I’m not sure what happened on the first lap, we all bunched up going up the hill then someone got into the back of me and I ended up in the back of one of the Walkinshaw(-Andretti-United) cars,” said Stanaway.

Stewards looked at an incident at Turn 1 on Lap 3 that saw James Golding (Garry Rogers Motorsport) beached in the sand trap, triggering a Safety Car.

Garth Tander and Todd Hazelwood were included in the investigation but officials found neither of the drivers were to blame.

Golding told Speedcafe.com that he locked the inside right front and clipped the back of Hazelwood which sent him into a spin.

“At Turn 1 on Lap 3 an Incident was observed involving Car #33, Garth Tander, Car #34, James Golding, and Car #35, Todd Hazelwood, which resulted in Car #34 spinning off track, the report reads.

“The DRD investigated the Incident after the Race and, having reviewed all of the available evidence, including Judicial Camera footage from Car #33, determined that the matter did not warrant referral to the Stewards because no breach of the Rules was observed.”

The Deputy Race Director felt contact between Will Davison (Milwaukee Racing) and Michael Caruso (Nissan Motorsport) at Turn 6 on Lap 3 didn’t warrant a referral to the stewards.

“At the request of Nissan Motorsport, the DRD conducted a post-race investigation into an Incident involving contact between Car #23, Michael Caruso, and Car #400, Will Davison, at Turn 6 on Lap 3 which resulted in damage to the front left wheel of Car #23. After reviewing the Judicial Camera footage from Car #23, the DRD determined that the matter did not warrant referral to the Stewards because no Breach of the Rules was observed,” read the report.

A request to review an incident between Fabian Coulthard (Shell V-Power Racing) and Craig Lowndes (Autobarn Lowndes Racing), which saw the former leave the track at Turn 6, saw stewards decide that neither driver was predominately at fault.

“Following a request for investigation from Racing Team (Aust) into an Incident between Car #12, Fabian Coulthard, and Car #888, Craig Lowndes, at Turn 6 on Lap 8 which resulted in Car #12 leaving the Race Track, the DRD reviewed the Judicial Camera footage from Car #2, Scott Pye (which was immediately behind Car #888 prior to the Incident), and from Car #12, and determined that no Driver was found to wholly or predominately to blame for the Incident,” the report states.

“During the Race an Incident was observed by Supercars Officials in Pit Lane involving contact between Car #7, Andre Heimgartner, and Car #9, David Reynolds, when car #9 was exiting its Pit Bay,” stewards confirmed.

“The DRD investigated the Incident following the Race and reviewed Judicial Camera footage from Cars #7 and #9 and determined that the matter did not warrant referral to the Stewards because no Breach of the Rules was observed.”