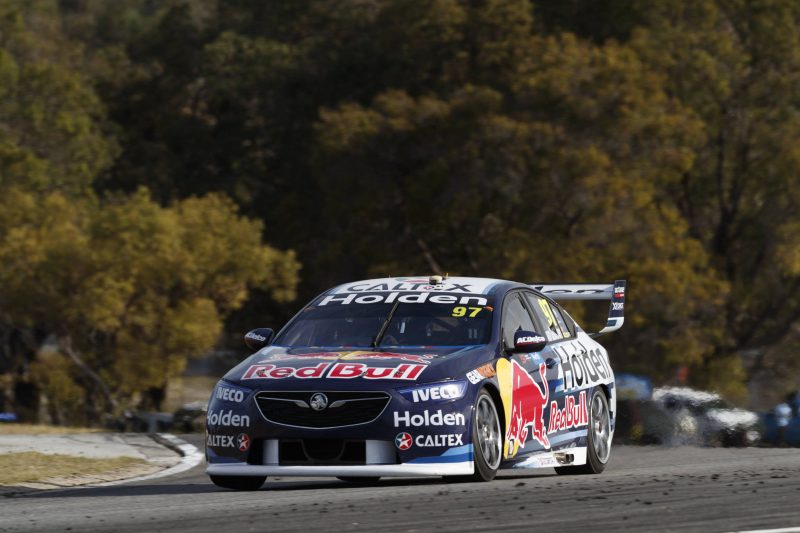 Shane van Gisbergen has qualified on pole for Race 12 of the Supercars Championship at Barbagallo while both DJR Team Penske Falcons fell at the first hurdle.

In a remarkable first part of Armor All Qualifying under grey skies, none of the top four on the grid the day prior could make the top six cut-off.

Championship leader and yesterday’s race winner Scott McLaughlin gambled by using only one set of tyres which saw him fall short, leaving him 19th on the grid.

“I put my hand up, completely my fault,” admitted McLaughlin.

“Just chasing too much into the bowl (Turn 6), just locked the front and just went wide.

“I was on a pretty decent first sector. Put my hand up for that, we’ll learn from that and we’ll just have to fight through.

“We thought we might have been safe because the track was slow. It’s all hindsight, we want to save the tyre or whatever, but we’ve just got to be aggressive and have a go and see where we’re at.”

McLaughlin’s team-mate Fabian Coulthard took a second set of tyres on the #12 Shell V-Power FGX Falcon to move up to seventh in the first 10-minute stanza and therefore 17th on the grid.

“I think we’re all a little bit surprised to be fair,” he said.

“I just had chronic front lock into Turn 1 which I haven’t had all weekend and I did my (fastest) time on my second lap.”

Coulthard will start next to the Bottle-O FGX Falcon of Mark Winterbottom and in front of his team-mate.

Cameron Waters, who started on the outside of the front row yesterday, could qualify the Monster Energy FGX Falcon only 22nd for Race 12.

Rain threatened to make proceedings even more dramatic when drops started falling midway through the final part of qualifying with Andre Heimgartner the fastest of five drivers to have set a time at that point.

It prompted the rest of the field to take to the circuit earlier than they might have liked and the rain was light enough for van Gisbergen to take the #97 Red Bull Holden Racing Team Commodore to pole position.

He will start alongside team-mate Jamie Whincup as the factory-backed Holdens went the opposite way to their chief Ford rivals relative to Saturday’s qualifying performance.

“It’s a massive change, conditions were very windy into the last corner and it made huge difference,” said van Gisbergen.

“Thanks to the team, we turned it around since Q3 yesterday. It’s an awesome turn around; cars are great. Looking forward to the race this afternoon.”

Chaz Mostert was the only Falcon driver to make the top 10, putting the Supercheap Auto-backed Tickford entry on the inside of the second row.

He will be joined by Plus Fitness Racing’s Heimgartner, who went faster again in the #7 Altima to secure fourth on the grid.

“It’s awesome and a great reward for all the boys,” said the Kiwi.

“Yesterday was a tough day for us, we really battled in the race and especially in qualifying so to come out today and be fast and sort of take that speed from practice is really good.

“Awesome to be on the second row and can’t wait for the race.”

Heimgartner is one of three Nissans in the top 10 with boss Rick Kelly (Castrol Racing) fifth and Michael Caruso (Drive Racing) eighth.

Richie Stanaway was a career-best 14th as a solo driver in the Mega Falcon and will start on the outside of another Tickford-built Falcon in the form of Milwaukee Racing’s Will Davison.

Back at the rear of the field, former Bathurst 1000 and championship winners Craig Lowndes (Autobarn Commodore) and Garth Tander (Wilson Security GRM Commodore) will start from the 13th and final row of the grid.