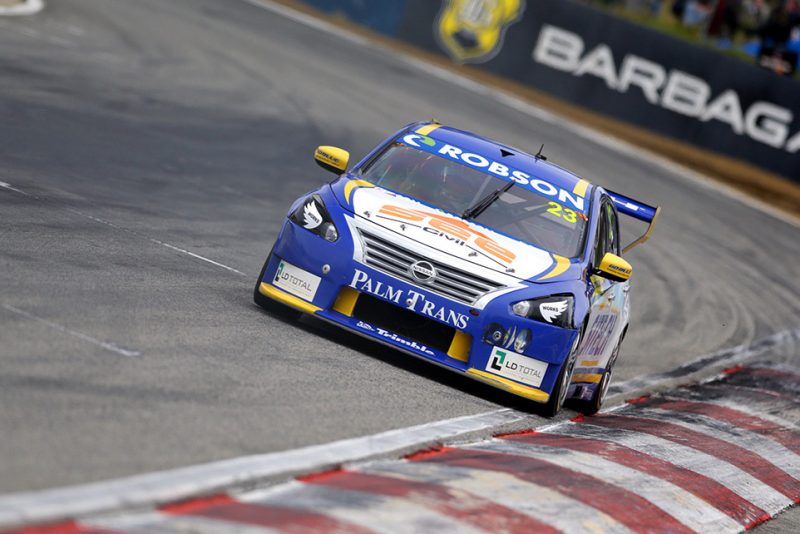 Dean Fiore has won for the first time in the Dunlop Super2 Series as changeable weather led to a frenetic race at Barbagallo Raceway.

The West Australian took over first position from rookie Thomas Randle on Lap 9 and pulled away over the remaining 10 laps as a huge battle for the minors raged behind him.

Rullo and Randle sat on the front row by virtue of results in Races 1 and 2 but the start was delayed due to rain on the warm up lap and a failure for the #57 Kostecki Brothers VF Commodore which saw Brodie Kostecki stuck on the grid.

While the race was declared wet, all 22 surviving cars remained on slicks when it officially started under Safety Car as per series regulations.

Green flags flew for the start of Lap 3, though Rullo had to catch the #62 MW Motorsport Nissan Altima before he even got to the control line when he slid off Turn 7, which was still greasy despite rain having by then stopped.

The Race 1 winner escaped that moment but came to grief 2.4km later when he sprayed off at the same corner.

Randle took up a lead of nearly a second as a result but soon had Dumbrell on his tail.

It was Fiore in the #23 MW Motorsport Nissan Altima, however, who made his move past the #88 Eggleston Motorsport VF Commodore at Turn 7 on Lap 8.

As the field got to the other end of the main straight, Randle pinched a brake and ran the #5 Tickford Racing FGX Falcon wide, ceding the position to Fiore but bottling up Dumbrell, Garry Jacobson, and Kurt Kostecki.

Fiore set what would be the fastest lap of the motor race on Lap 10 and went on to take his first race win in a Supercar in an encounter which went time-certain after 19 of the scheduled 28 laps.

The Nissan Motorsport Pirtek Enduro Cup co-driver also took round honours, while his achievement means that all three MWM drivers have won a race each in 2018.

Kurt Kostecki got down Jacobson’s inside at Turn 7 on Lap 11 but couldn’t slow the #55 Kostecki Brothers VF Commodore enough to make the pass stick.

Jacobson then briefly threatened Dumbrell for third, but when they got stuck behind Randle again it was Kurt Kostecki who capitalised as he elbowed past Jacobson’s #26 MW Motorsport Nissan Altima at Turn 6 on Lap 16.

Dumbrell passed Randle as they all arrived at the bottom of the back straight before Kurt Kostecki pulled off a similar move on Car #5 at Turn 6 next time around.

Jacobson got his nose alongside Randle at Turn 7 on Lap 18, making room for Macauley Jones (#14 Brad Jones Racing VF Commodore) to follow him past as they started the final lap.

Jacobson therefore took fourth from Jones and Randle, who was on for the round win until he lost those positions late in the piece.

Mason Barbera (Garry Rogers Motorsport VF Commodore) added another top 10 finish to a personal best of fifth in Race 1 and eighth in Race 2.

Dumbrell’s series lead is out to 112 points while Pither and Kurt Kostecki retain second and third respectively.