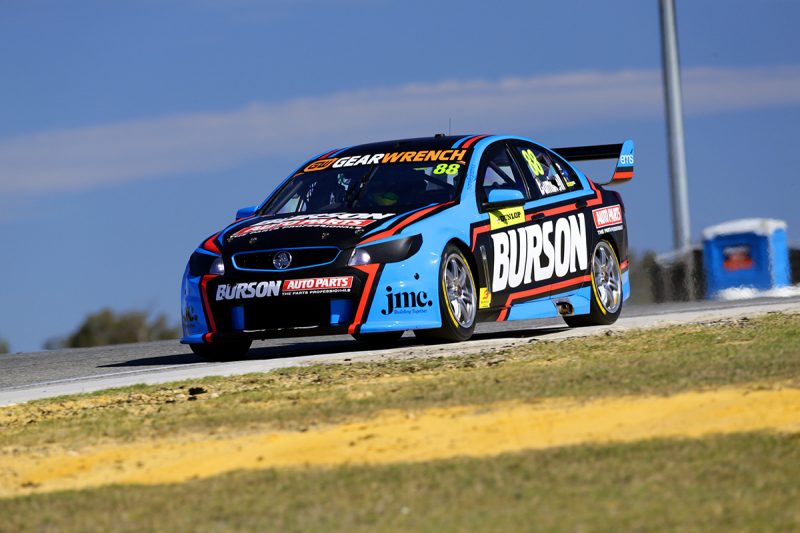 Paul Dumbrell has extended his Dunlop Super2 Series lead with a lights-to-flag win in Race 2 at Barbagallo Raceway.

Dumbrell got the jump on first-time pole-sitter Thomas Randle from the outside of the front row and was never headed as he eventually beat the rookie to the chequered flag by 6.01s.

Garry Jacobson managed to hold out Chris Pither in the battle for third.

Dumbrell was faster when the lights went out and the #88 Eggleston Motorsport VF Commodore cleared Randle’s #5 Tickford Racing FGX Falcon by the time they got to the first corner.

The two-time series winner had a lead of more than 0.6s at the end of the standing lap and drove away over the next 26 laps to notch up a fifth race win of the season.

Jacobson kept in touch with Randle particularly in the early laps but did not mount a serious challenge for second position.

His #26 MW Motorsport Nissan Altima instead came under close attention from Round 2 winner Pither.

The New Zealander got down the inside at Turn 7 on Lap 18 but carried way too much speed and gave up the position on exit.

Pither had more looks at a move but couldn’t get the #44 Garry Rogers Motorsport VF Commodore past again before the chequered flag.

Shae Davies (#67 Paul Morris Motorsport FGX Falcon) was fourth off the start and gave up one position over the journey, to Pither on Lap 12, to finish fifth.

Sixth went to Race 1 winner Alex Rullo, who had a see-sawing battle with two of the Kosteckis.

Rullo lost the place in wild circumstances at the start of Lap 12 when he drove across the nose of Car #55 as he tried to cover a criss-cross but managed to catch the #62 MW Motorsport Nissan Altima on the grass.

Kurt Kostecki seemed to make an error, unseen by cameras, when he dropped 11 positions on Lap 16, but it was cousin and team-mate Brodie Kostecki (#57 VF Commodore) who took up the battle shortly after.

The second-year Super2 driver made the move on Lap 18 but ran off at Turn 6 five laps later and dropped to 17th.

After all of that it was Rullo, on a bad sportsmanship flag after his run-in with Kurt Kostecki, who made a net gain of one position from his starting berth of seventh.

Will Brown’s disappointing weekend in the #38 Eggleston Motorsport VF Commodore continued with an early off at Turn 6 on his way to 20th.

The final race of Round 3 starts at 1255 local time/1455 AEDT, with Rullo set to start from first position alongside Randle by virtue of points amassed so far.