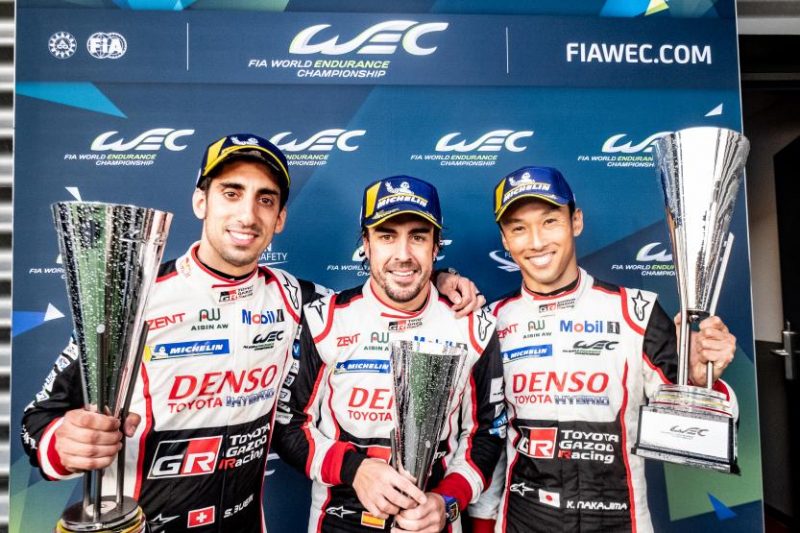 Fernando Alonso has emerged victorious on his World Endurance Championship debut with Toyota Gazoo Racing in the 2018/19 season-opening 6 Hours of Spa.

The #8 TS050 Hybrid which Alonso shared with Sebastien Buemi and Kazuki Nakajima had a mostly untroubled run to the flag, heading home the sister #7 Toyota of Mike Conway Kamui Kobayashi and Jose Maria Lopez for a 1-2 finish outright.

Conway, who was behind the wheel of the #7 at the time, chased Alonso down in the final stint after a Safety Car neutralised the latter’s advantage following a heavy accident for Matevos Isaakyan at Eau Rouge.

Upon restart, Conway looked the quicker of the Toyotas but ultimately appeared to settle for second and cross the line 1.4s behind Alonso, who earned his first win since the 2013 Spanish Grand Prix.

Rebellion Racing took the chequered flag third and fourth through Cars #1 and #3 respectively.

However, #1 was disqualified post-race for an overly worn skid block, promoting the #3 of Gustavo Menezes, Thomas Laurent and Mathias Beche to the final spot on the podium.

G-Drive Racing claimed LMP2 honours in the form of the #26 entry of Jean-Eric Vergne, Roman Rusinov and Andrea Pizzitola.

In GTE-Pro, the #66 Ford GT of Olivier Pla, Stefan Muecke and Billy Johnson took victory after a late pass on the #91 Porsche 911 RSR, before the #92 Porsche in the hands of Michael Christensen muscled its way to second in the closing stages. 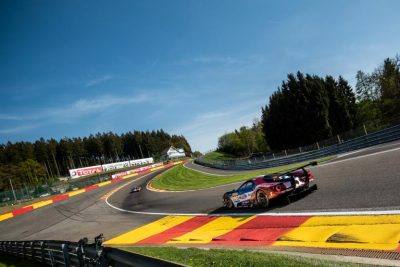 Davide Rigon in the #71 AF Corse Ferrari also capitalised on a struggling Richard Lietz in the #91 Porsche to claim the final spot on the GTE-Pro podium, with Lietz holding onto fourth.

The first of the BMW M8 GTEs finished fifth in class ahead of the lead Aston Martin Vantage in sixth.

Ford’s victory came in contrast to an abrupt end for the sister car which was taken out of contention early in the second hour of the race following a heavy crash for Harry Tincknell at Eau Rouge.

In GTE-Am, Pedro Lamy managed to hold onto the class victory for Aston Martin Racing with the TF Sport Aston Martin and Clearwater Racing Ferrari rounding out the class podium.

Fellow Australian Alex Davison and co-drivers Ben Barker and Michael Wainwright finished seventh in class after recovering from an early tangle with the barriers.