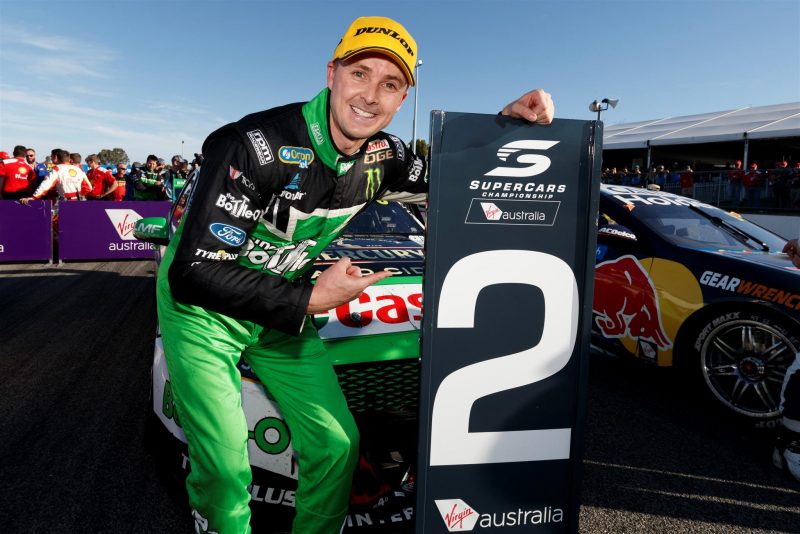 Mark Winterbottom says he’s found the feeling he’s been missing for the last two seasons following his second place in Race 11 at the Perth SuperSprint.

The Bottle-O Falcon driver raced towards the front of the field in the first half of the race, before a bold strategy saw him climb his way through the field following his stop with 21 laps remaining.

Having rejoined 16th, Winterbottom found his way back to second with three laps remaining.

“I think we had good car pace and I was getting boxed up behind Fabian quite heavily,” said the 2015 champion.

“He handles quite well down the straight so it was hard to pass him. When I got past him I dropped a second a lap, so our pace was strong and then we just kept going along.

“Thankfully we got back past all the other guys and Scott was in the distance, on the horizon somewhere down there, and we got back to second.

The result not only marked Tickford Racing’s best result of the season but the team’s first podium in what has been a tough opening to 2018.

It’s cause has not been helped by the rapid fire nature of the calendar, which has seen the opening five events fall within nine weeks.

For his part, Winterbottom credits the turnaround in fortunes with the engineering efforts in the factory.

“When you’re struggling, you don’t have a lot of time to actually do much development,” he said.

“Our engineers, I think in the last four weeks, have had about two days off.

“We don’t drive any different, do (anything) different, but they’re putting in the hours, they’re listening to what we’re saying. It’s a credit to them.

“We’ve been struggling in the races and we know it,” Winterbottom continued.

“The good part is we haven’t hidden behind it. We haven’t gone, ‘It’s this or that’, we just weren’t quick enough.

“We’ve worked our backsides off to get it moving forward.”

Though a positive step forward, Winterbottom isn’t allowing himself to get carried away on the back of a single result, suggesting the unique Barbagallo circuit may simply have played to his strengths.

“This track is quite low grip so I think it may suit our car a little better but we haven’t come here with the same car,” he explained.

“For me the feeling in the car is something I haven’t had in about two years, so the change we’ve made I think gave me that.

“I didn’t have it here last year, that feeling I had today, so we’ve made gains, which is great, but whether it continues on… when we go to Winton it will be a new challenge, but it’s definitely a good feeling.”