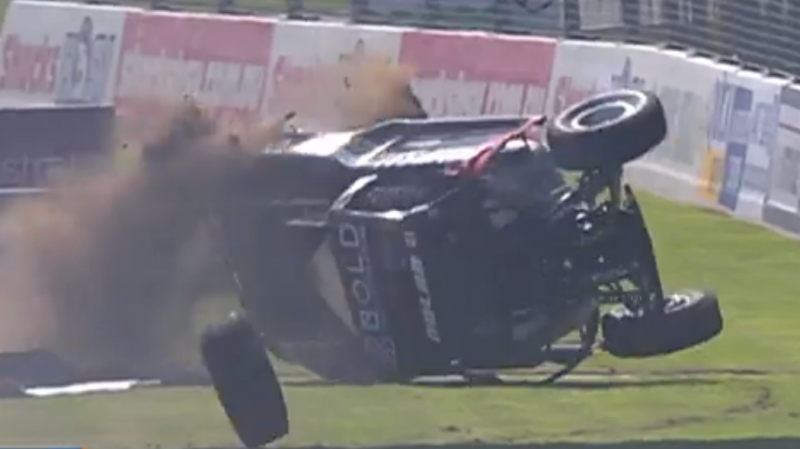 Arie Luyendyk Jnr won the opening race of the weekend for the Stadium Super Trucks at the Perth SuperSprint which was marred by a violent roll over for Matt Nolan.

Nolan’s truck was tipped into a sideways roll over on Lap 5 after hitting a jump on the main straight at an angle, with the left rear wheel departing and hitting the pedestrian foot bridge.

The incident brought out the red flag, with Nolan, who was leading at the time, getting out under his own steam.

Luyendyk Jnr led the field back to green before the Safety Car was deployed on Lap 11 when Gavin Harlien ended up on his side following a crash while battling for the lead.

The intervention left a short run to the chequered flag, with Luyendyk Jnr maintaining the top spot from Jeff Hoffman and Paul Morris who rounded out the podium.

Stadium Super Trucks return to the circuit on Sunday for their Shootout session at 0950 local time/1150 AEST.

Rick Gill won Race 2 of the weekend outright in the Saloon Cars at Barbagallo Raceway.

The top five was rounded out by Brad Boley (VT Commodore) and Glenn Crankshaw (AU Falcon), with Race 3 set to take place on Sunday at 0810 local time/1010 AEST.

Bryce Moore claimed victory in both of the day’s WA Formula Ford races.

Moore took out Race 2 after passing Peter Major for the lead in the opening laps at Turn 7, with Joshua Matthews crossing third.

In Race 3, the top three positions were mirrored with Moore once again taking the win ahead of Major and Matthews, who crossed the line second but was relegated to third with a five-second time penalty.