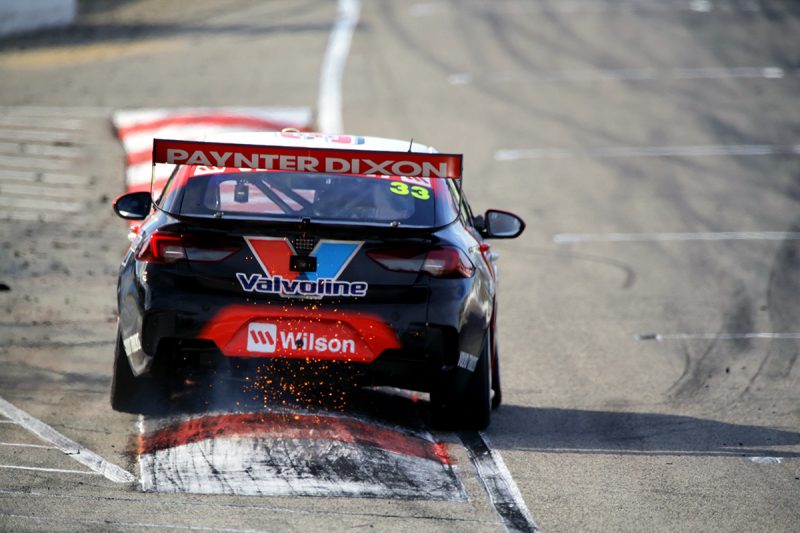 Supercars will assess if any changes need to be made to the track limits ruling at Barbagallo Raceway after several drivers appeared to abuse the run off at the final corner.

Supercars officials have confirmed to Speedcafe.com that they will conduct a review tonight which could prompt a change for Sunday.

Drivers were told during a briefing on Friday night that track limits would not be enforced at Turn 7.

While there were few who used the run off in practice the majority of the field took advantage of the tarmac run off and carried more speed into the right hander, running all four wheels over the white lines that designate the edge of the circuit.

The circuit has a peculiar layout at the final corner with two pit complexes, one of the infield used only for Supercars and the traditional pit lane, where there is a tarmac apron the other side of the Turn 7 exit kerbing.

The sensor which triggers a breach of track limits is currently placed on the kerb itself and not the apron.

The issue has sparked comment from some drivers and team owners who feel the track limits rule should be enforced at the corner.

“I think something needs to be done though, it does look a bit amateur,” said race winner Scott McLaughlin when asked about the track limits issue.

“I think the guys know what they’re doing; track limits is track limits, we did that last year with no issue.”

“I think they’re looking at it,” said Dutton.

“They didn’t think – and I understand the logic – that drivers were going to use it the way they did, because it’s like one of those things.

“If you take a little bit of it, there was no gain, but it was only when the drivers start really mauling that corner under brakes and using that extra braking, you still hurt your exit, but when you’re gaining so much under brakes and just going off the track, it started looking silly.

“When the officials (enacted) that rule, for various reasons, they didn’t expect people to maul the corner, so hence they say they’re going to do something overnight, which is the right thing to do.”

Shane van Gisbergen revealed that drivers had recommended for the kerb to be extended all the way to the start of the traditional pit lane entry, which he feels would resolve the problem.

“I think on our side we’ve simply missed a trick,” said van Gisbergen.

“They made the rules clear in drivers briefing. You race to the sensor and we didn’t push it because it’s not faster.

“We started doing it in the race and that’s fair enough, we were doing it, but it just wrecks the car.

“I think all the drivers got together, not only for this track, but every other track on the series (about) what we could improve, and one of those things was to get that kerb and extend it five, 10, whatever metres it was back to the entry of the other pit lane, which wouldn’t affect that and that would stop this completely.

“But there’s been a few other things this year that haven’t been done.”

Erebus Motorsport team manager Bruin Beasley admits the gain by running wide at Turn 7 is marginal but feels drivers should be penalised for running all four wheels over the white lines.

“The kerb over there, no one’s actually breaking the rules but my view is, in any category we’ve ever done, if you’ve got four wheels outside the track limits, then you’ve done that,” said Beasley.

“If there was a wall there they wouldn’t do it; that’s as simple as it is.

“So I think they’re taking advantage of something that’s marginal, but the reality is if that was grass there, they’d have four wheels on the grass and they’d have an accident.

“So I believe, if that kerb is the track limit, if you’ve got four wheels over it, you should be penalised; that should be the simple standard rule to go anywhere, whether it be a white line, a kerb, or a bit of grass.

“But, they’ve (stewards) said as long as it doesn’t trigger on the strike you’re not doing anything wrong, so they’re doing what they’re allowed to do.”

The issue is understood to have contributed in the rise of incidents while drivers attempted to enter pit lane during the race.

Extra speed being carried into the corner has made the closing speed to a preceding driver trying to enter the pits greater, causing contact between cars.

Chaz Mostert was turned round by Jamie Whincup while trying to peel into the pits, which resulted in the latter copping a five second penalty.

James Courtney was also sent spinning by Garth Tander in a similar situation that went unpenalised.