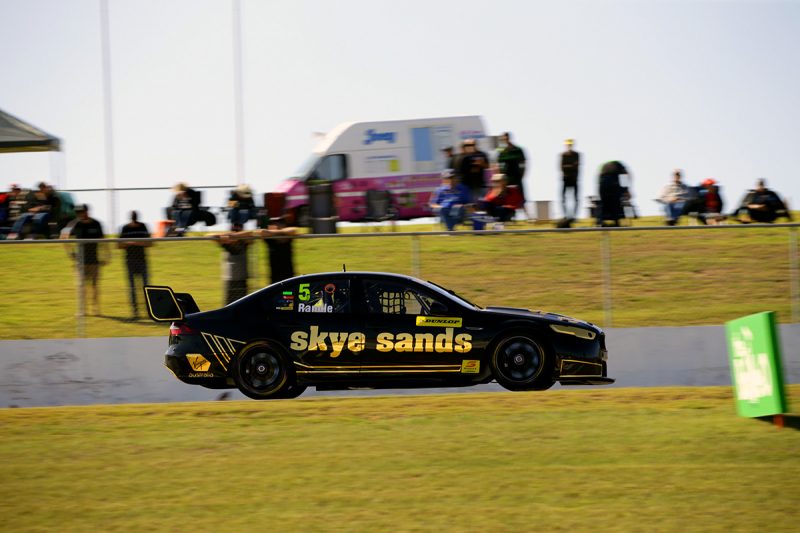 Alex Rullo and Thomas Randle have each become Dunlop Super2 Series pole-sitters for the first time in Round 3 at Barbagallo Raceway.

Rullo got his fastest lap in shortly before a final-minute red flag in Armor All Qualifying for Race 1 to head an all-West Australian top three of Brodie Kostecki and Dean Fiore.

Randle waited until late in Qualifying for Race 2 to set his first flyer, jumping to the top just ahead of Paul Dumbrell.

Armor All Qualifying for Race 1

Rullo was only eighth after the first runs before taking the #62 MW Motorsport Nissan Altima to a 0:57.1874s, which was 0.0457s quicker than Brodie Kostecki’s (#57 Kostecki Brothers VF Commodore) initial pace-setter.

Chris Pither looked a very good chance for a third straight pole position when he went 0.18s under Rullo with the fastest first and second sectors.

However, he wasn’t allowed to finish off the lap due to a red flag called in response to Jack Smith beaching the #21 Brad Jones Racing VF Commodore at Turn 7.

Smith was sixth at the time but lost his best lap for causing the stoppage, relegating him to 20th and putting Pither (#44 Garry Rogers Motorsport VF Commodore) up one position to eighth.

Fiore (#23 MW Motorsport Nissan Altima) shares Row 2 with Dumbrell, who opted for only one proper run in the #88 Eggleston Motorsport VF Commodore.

Garry Jacobson (#26 MW Motorsport Nissan Altima) will start 12th as a result of a penalty for the man who had been one position higher.

Adam Marjoram (#15 Image Racing VF Commodore) was issued a three-position grid penalty for an incident with Barbera when he appeared to retaliate over being compromised into Turn 7 on a flying lap.

Armor All Qualifying for Race 2

Randle left it until eight minutes into the second 10-minute session to set his hot lap and vaulted all the way to first position.

Dumbrell, who had reeled off a ‘56’ at the start of the session, opted for a second run but couldn’t improve and will start on the outside of the front row.

Jacobson earned a second row start on his second run, while Chris Pither moved up from eight after the first runs to finish the session fourth when he moved onto new tyres.

Row 3 will be Shae Davies (#67 Paul Morris Motorsport FGX Falcon) and Kurt Kostecki while Rullo fell from second to seventh, albeit with a faster lap than in Qualifying for Race 1, when he didn’t go out for a second run.

Will Brown (#38 Eggleston Motorsport VF Commodore) only ended up two positions higher than he finished the earlier session in 17th.