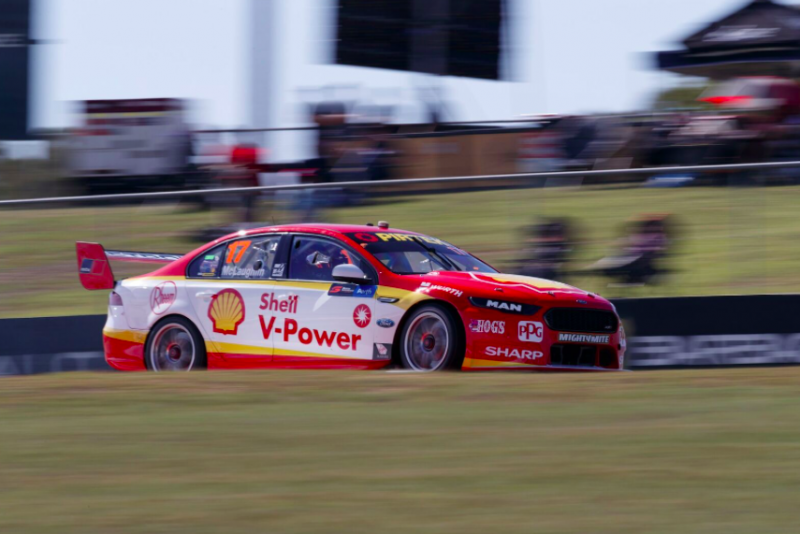 Scott McLaughlin has qualified on pole for Race 11 of the Supercars Championship while both Red Bull Holden Racing Team cars missed the top 10.

Shane van Gisbergen could only manage 12th and Jamie Whincup 14th as they failed to progress past the second, 10-minute part of Armor All Qualifying.

Van Gisbergen’s #97 ZB Commodore looked particularly loose while Whincup had a moment almost immediately when he ran wide onto the concrete apron at Turn 4 on his first flyer.

The defending champion was at a loss to explain his lack of pace.

“We’re not really sure what’s going on,” admitted Whincup.

“(There’s) a lot of grip out there and we didn’t really maximise the grip. We’ve got some work to do.

“I’ll have to have a look at the sector times; the car didn’t feel that bad, just not quite quick enough.

McLaughlin had no such trouble in an extremely tight fight for pole.

The 2017 qualifying master returned the favour on his second run, going 0.0726s faster than the Monster Energy FGX Falcon but still feeling unsatisfied.

“It’s nice (but) That one I absolutely made a meal of it,” said McLaughlin.

“I didn’t give myself a big enough kick up the backside after (an error in) practice so I need to go back and look at it.

“Bit annoyed with myself; I felt like we could have done that on the first set.”

Waters did not improve at his second attempt but was a similarly tight margin ahead of Coulthard.

Winterbottom (The Bottle-O Racing FGX Falcon) missed the inside of the second row by even less at a split of just 0.0038s to Car #12.

Tim Slade (Freightliner ZB Commodore) was the only Holden in the top six and will share Row 3 with another Tickford man in Chaz Mostert (Supercheap Auto FGX Falcon).

Craig Lowndes (Autobarn ZB Commodore) was eighth and Will Davison (Milwaukee FGX Falcon) 10th, the latter not appearing in Part 3 as he opted to save tyre life.

Scott Pye was the first of those who missed the final 10 minutes but still qualified 10 positions higher than James Courtney in the sister Mobil 1 Boost Mobile ZB Commodore, who gambled and lost on using only one set of new tyres.

Simona de Silvestro fell just short of equalling her personal best qualification in Supercars, set during the corresponding event last year, and will take up 15th on the grid in the Team Harvey Norman Nissan Altima.

She was still the best of the Nissan Motorsport quartet, with Rick Kelly last and his Castrol Racing Altima now undergoing an engine change ahead of Race 11.