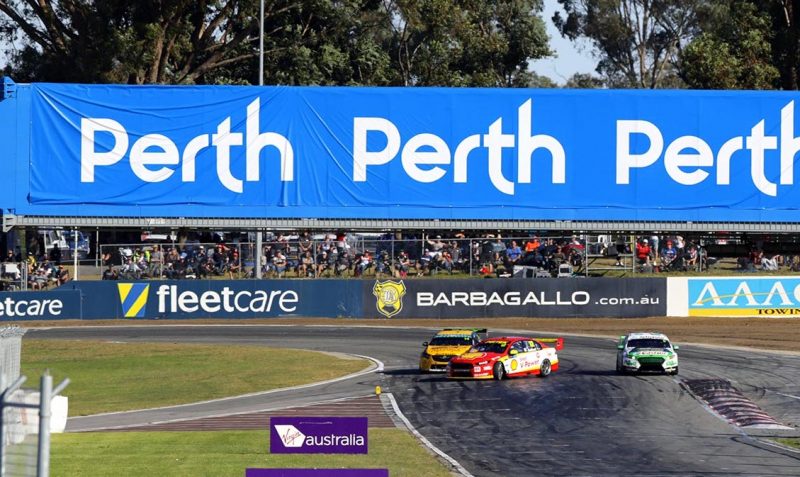 Tickford Racing boss Tim Edwards believes switching to Barbagallo Raceway’s alternative pit lane entry would be too dangerous after a spate of incidents in Race 11 sparked calls for a change to the current pit entry.

Entry to the pits at the Perth circuit has proven to be a recurring issue although Race 11 saw three incidents that resulted in contact while drivers attempted to peel into the pit lane.

Tickford’s Chaz Mostert was turned round by Jamie Whincup while trying to enter into the pits, which resulted in the latter copping a five second penalty, dropping him from sixth to 11th at the finish.

James Courtney was also spun after contact from Garry Rogers Motorsport’s Garth Tander in a similar situation that went unpenalised, while Mark Winterbottom bumped Shell V-Power Racing’s Fabian Coulthard into a slide as the latter dived into the pits.

The incidents sparked calls for changes to pit entry include the possibility of using the circuit’s alternative entry which leaves the race track on the run downhill to Turn 7.

“Obviously they’re thinking that if someone sprays it you’re going to go straight across the track, but I guess you could just move the line to the top of the hill, similar to Phillip Island,” said Scott Mclaughlin when asked about the use of the alternative pit lane.

“I know it’s going to make it a long pit lane but I personally think that’s a way better entry, way safer, than what we’ve got now.

“We talk about it every year but obviously with a few incidents today it’s just gone out of control.”

Tickford boss Edwards says that his team trialled the pit lane during a ride day which, he feels, resulted in a far more dangerous pit entry for drivers.

“When that was first put in (New pit lane opened 2012), I happened to be here, we had a ride day after the event, and one of the things they asked us to do was to try it,” said Edwards.

“So it was the first year that we had this new pit entry and there was a load of debate, ‘Oh they should have used that one’, so they asked the ride day to use that and I was with Frosty in the car and he came in that one and I went, ‘Whoa! Stop. Don’t. Don’t do it again.’

“The speed you come in down there… it’s not safe.”

Meanwhile, Triple Eight team manager Mark Dutton felt the penalty on Whincup was ‘a little bit harsh’ but has accepted the decision.

However, he believes incidents of this nature have increased due the fact drivers were carrying more speed into the corner after officials chose not to enforce track limits at Turn 7.

The track limits ruling is being reviewed by Supercars officials.

“It looked a little bit harsh from the angles I’d seen but Bairdo (Craig Baird, Driving Standards Advisor) had more cameras and more angles, and Mostert didn’t indicate which sometimes you get the drivers to do but in this instance he was hugging the inside,” said Dutton.

“I didn’t see it but that’s what Bairdo said – so that was enough indication to Jamie he said.

“If that’s the case, fair enough.

“It’s a tough one because the bigger issue with the corner was because the cars could exit and do the silly Turn 7 thing, they’re actually going through there about 10km/h quicker, so now there’s such a differential between coming into the pits or that corner, much bigger than it’s ever been.

“But by nature of that exit kerb being allowed to be used, the chance of incidents is so much higher than it has been in the past.

“Courtney’s looked like a late call. He was way out (wide in the corner) and turned across in front of other people. That (Tander not being penalised) makes sense.”

Edwards agreed the Whincup penalty was justified but described the incident as ‘one of those things’.

“I don’t really have a view on it. It hampered Chaz’s day, but accidents happen, it was one of those things,” said Edwards.

“Where he got turned was very early in the corner. I think it’s because he turned him so early, whereas I think the Courtney one, he was further around before trying to get back in.”