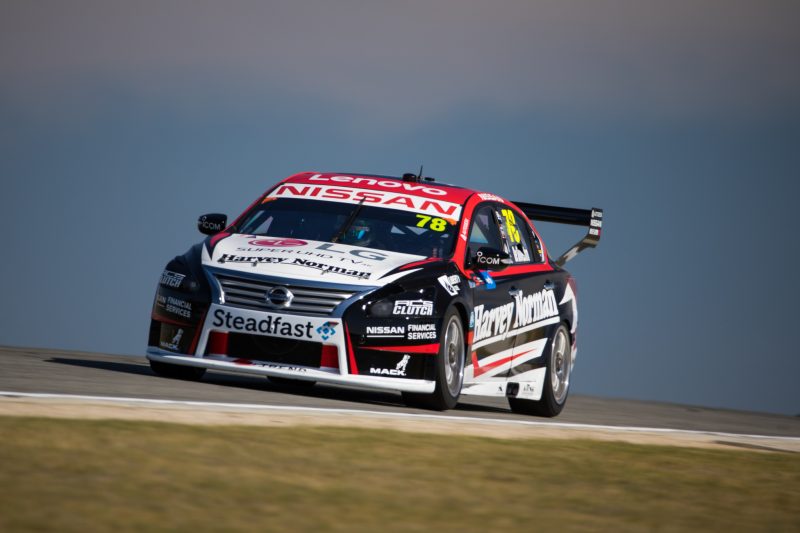 Simona de Silvestro says a top 10 in practice has given her confidence in the approach her side of the Nissan Motorsport garage is taking at the Perth SuperSprint.

The Swiss driver finished 10th in Practice 2 which will see the Altima driver progress straight to the second segment of Supercars’ new qualifying format tomorrow at Barbagallo Raceway.

After a frustrating start to the season where her pace has been masked by incidents in races, the 29-year-old was pleased that her pace underlined the engineering direction.

“I think this year we’ve been more in the mix compared with last year, and now I know it’s suddenly showing and being the quickest Nissan is good for the team,” de Silvestro told Speedcafe.com.

“It is good for my engineer and also with the way we’ve started to set up our cars is a little bit different to my team-mates.

“To get final the result with that philosophy to show that it’s good just gives us a lot of confidence in keeping working in that direction.

“It’s awesome because in Tassie we were 11th, so it was a bit frustrating and to be 10th today is pretty good.

“Still, it’s a long day tomorrow in the race but it feels good to be where we are and the team has been working hard.

“I haven’t brought the car back in that good a shape during the races, so hopefully we’ll start a little bit more up front tomorrow and have a good race from there.”

Although de Silvestro’s race results have not been as strong compared to last year, she believes progress has been made this season which has added to her frustration.

“If I look at last year I had better results but my pace was worse,” de Silvestro added.

“But now we’re kind of in the mix and we’re getting taken out more, we’re getting pushed around more, so yeah the results are worse.

“But pace wise, I think we’re much better this year but now we just need to find that next step.

“I think once we’re around that top 12 things start to come a little bit easier as well because you run the same pace and stuff like that.

“At the back it’s always a bit of a mess and it’s been a bit frustrating so far.”

The Supercars field will return for a 20 minute practice at 1000 before the first segment of qualifying at 1155 local time.