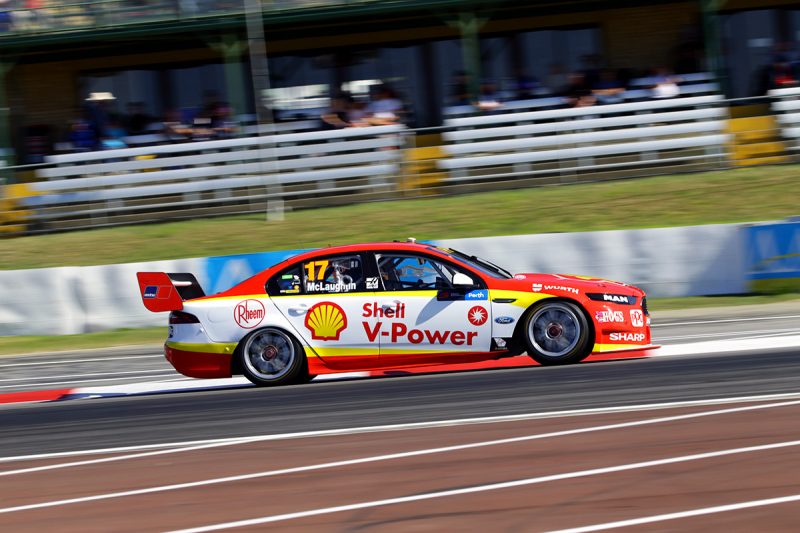 Scott McLaughlin has finished on top in Friday practice at the Perth SuperSprint as Craig Lowndes ended the day’s second session in last position.

McLaughlin was quickest from Cameron Waters and Fabian Coulthard, with Lowndes consigned to 26th having possibly been baulked on his final flyer at Barbagallo Raceway.

With combined Practice 1 and Practice 2 times determining the starting order for the return of the three-part Armor All Qualifying format, all 26 cars lapped faster in the latter session than Andre Heimgartner’s benchmark from the first.

McLaughlin made sure that he would have direct passage to Part 2 of qualifying tomorrow when he reeled out the first ‘54’ just beyond the 40-minute mark in the #17 Shell V-Power Racing FGX Falcon.

That 0:54.8871s remained fastest for the final five minutes, though Waters came within a whisker just before the chequered flag in the Monster Energy FGX Falcon.

“I kept stuffing up the bloody first all day,” McLaughlin admitted.

“Both sets of tyres beforehand, I didn’t really get a nice banker before that lap so I was pretty nervous that whole green tyre lap; if I made a stuff-up we were out.

“I think there’s a lot more in myself and obviously Fabs as well, great for us to both be up there and tomorrow… it’s just nice to be in the (top) 10.”

Coulthard (DJR Team Penske) made for three Fords in the top three while Red Bull HRT’s Jamie Whincup was first of the Holdens in fourth, one position ahead of rookie Anton de Pasquale (Erebus Thermosphere Racing).

Simona de Silvestro was the first of the Nissan Motorsport Altimas and the final driver to make the cut, 0.4616s slower than McLaughlin’s fastest lap.

The next six cars missed the top 10 by less than a tenth of a second, headed by David Reynolds (Erebus Penrite Racing).

Replays suggested, however, that Lowndes was delayed by Reynolds through Turn 5 on his hot lap.

“We had a good first sector, got past a couple of cars over (Turns) 3 into 4.

“As we were going over (Turn) 5 we caught a competitor and had to run really wide.

“Look, it’s one of those things. You lose the goodness of tyre around here and you lose a lot of time.

“If we’d completed the lap we should have been in the (top) 10 somewhere, which is what we were aiming for.”

Pye was among the first to start his final run and was in fact fastest before McLaughlin set the ultimate fastest lap.

Whincup completed 30 laps, at least seven more than any other driver, and appeared to be using the start of the session as a race simulation given that he completed fewer runs (five) on the circuit than anyone else.

The Virgin Australia Supercars Championship field is back on-track tomorrow for Practice 3 at 1000 local time/1200 AEST.