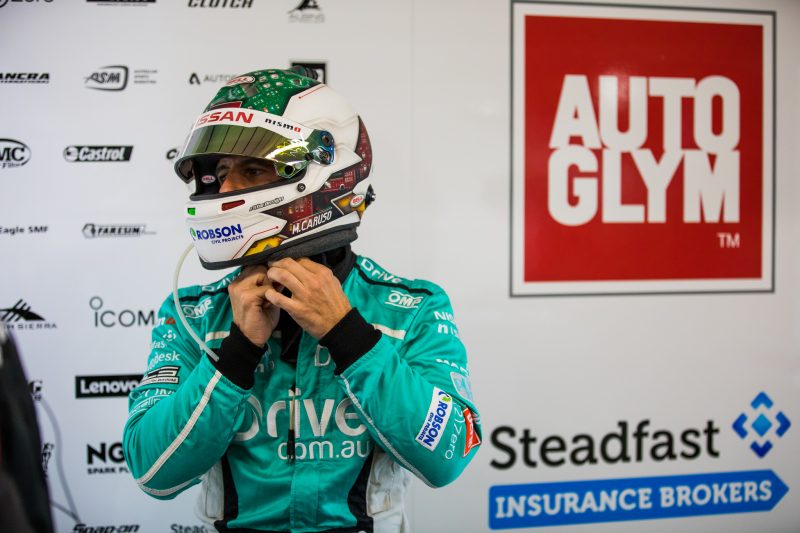 Michael Caruso is keeping his mind focused on achieving results on track to help maintain a place on the Supercars grid next year.

The Nissan Motorsport driver is in the final year of his current deal marking him one of the key out of contract drivers heading into the 2019 campaign.

Caruso penned a two-year contract extension with the Braeside squad as part of Nissan’s recommitment to the championship in 2016, which is also set to expire at end of the year.

The 34-year-old has been the four-car outfit’s top performer in last two campaigns and has scored one of two race wins after joining Nissan for its return to Australian touring car racing in 2013.

While Nissan is yet to make a call whether to continue its Supercars program, Caruso believes strong results on track will ultimately take care of his own Supercars future no matter what decision is made by the manufacturer.

“At the moment, obviously I’m out of contract, I think my position won’t be threatened by, I guess, other stuff in the team,” Caruso told Speedcafe.com.

“It’s hard to know at this stage, to be honest.

“I want to obviously focus on what I’m doing on-track and off-track stuff should sort itself out, which is the normal scenario I think.

“I haven’t even looked much into it, so it’s full steam ahead on race track. But like I said, on-track stuff is the most important thing.

“I guess looking after the on-track stuff is always a good thing and every driver’s the same.

“I’m sure that they (drivers) want to do the best job that they can on-track and that makes it easier off-track, so it seems like it works for everyone else.

“I think everybody knows, my ability, and every driver is in a different scenario in different teams at different times and different equipment, so there’s so many different factors in motor racing.

“I don’t think it’s ever as clear-cut as what it looks like on TV or reading a paper.

“I feel like I’ve done a really good job. I was at Garry Rogers Motorsport for five years and now here (Nisan Motorsport) for six, so everywhere I’ve been it’s been a long, enjoyable stint.

“So loyalty’s a good key and obviously everywhere I’ve worked, everyone’s been happy, so that’ve why I’ve been around I guess.”

With Supercars seemingly heading towards an new era spearheaded by the recent confirmation of the Ford Mustang and the possibility of a Chevrolet Camaro or Nissan GT-R entering the series, Caruso is eager to be a part of the championship’s future.

“The next wave of cars is going to be really interesting I think,” he added.

“We’re sort of going into a realm with a car that’s completely different to what we’ve seen in the past from a production car, so how it will look and how it’ll be on-track, trying to get the parity and all that stuff, is going to be interesting to see how it plays out.

“I’m sure no doubt that’s what makes our sport as a whole extremely interesting, so the next few years is going to be fun to be part of.”

Caruso heads into this weekend’s Perth SuperSprint off the back of his best result of the season following a fifth in Race 10 at Phillip Island.

The finish backed up strong pace from team-mate Rick Kelly who scored a double podium as Nissan flexed its muscles with the front runners.

However, the unpredictability of the series to date has left the #23 Altima driver unsure if the form will continue at Barbagallo Raceway.

“You don’t know these days. We’ve seen the results up and down pit lane sort of jump around a bit,” he said.

“I’d be surprised if anyone in pit lane was that confident that they’re going to be right at the front at the moment.

“We feel like that the work we’re doing is obviously in the right direction, but again, until you get on the circuit, you really don’t know.”

Opening practice is scheduled to begin at 1105 local time.