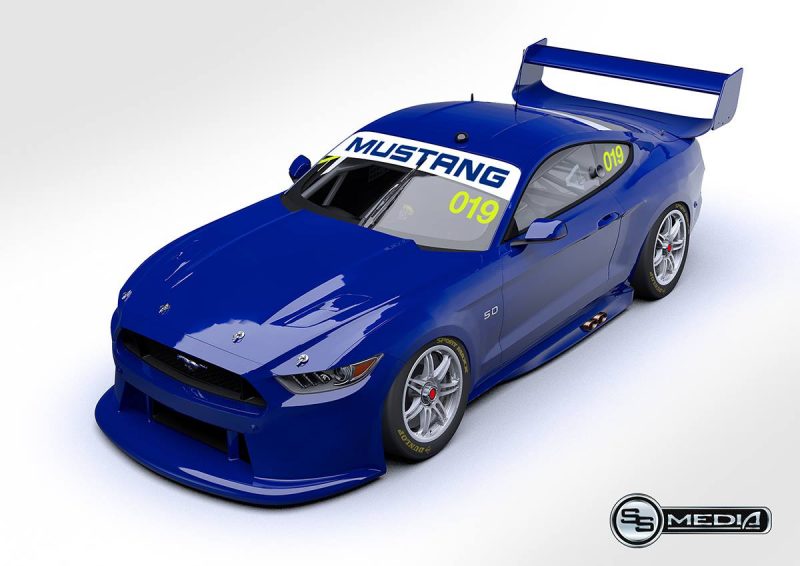 A render of what the Ford Mustang Supercar could look like Pic: ssMedia

Work is well underway on the next phase of developing the Ford Mustang Supercar ahead of homologation testing which is tipped to begin in November.

Last month saw a landmark announcement for Supercars with confirmation that the Mustang will join the grid next year as a replacement for the Falcon FGX.

Much of the work completed on the project has been focussed on proving the Mustang body shape can be converted into a Supercar and fit on the category’s control chassis.

It is only now that work is being carried out on aerodynamic studies for the car.

DJR Team Penske has taken over the role as the Ford homologation team from Tickford Racing to develop the Mustang.

However, the two squads will work closely as an alliance on every step of the project.

The duo worked together when carrying out initial evaluations of the Mustang back in 2016.

“The work that has been completed today has been under the guises of proof of concept and conceptual studies to understand if it is possible to turn a Mustang into a Supercar and understanding some of the restrictions and dimensions of the control chassis,” DJR Team Penske Managing Director Ryan Story told Speedcafe.com.

“That has been where our resources have been targeted.

“It is only now that we are starting to work more on the key areas and get underway with the aero study.”

Although admitting the timeframe to complete the project is not perfect, Story is confident that the required resources are in place.

DJRTP’s Ludo Lacroix and Tickford Racing’s Nathaniel Osborne have been announced as key engineers in delivering the car with ‘grunt work’ to be completed by Ford Performance in America.

They will also be assisted by DJRTP chief designer Perry Kapper, who joined the squad from Nissan Motorsport last year.

“It is a later start than would be perfect but we have got strength and depth of resources to do it properly and work has been on in earnest in the last week or so,” said Story.

“Perry (Kapper) is the leader from the design side but Ludo (Lacroix) is the ringmaster of the project.

“You work back from the key dates prior to homologation; that is how these projects take place.

“We have got a fairly strict timeframe set about already. We want to make sure we do things methodically and properly and that is the best way to approach it.

When asked if testing was likely to begin in November, Story added: “I think if you go back and look at the last few homologation processes that would be a fair assumption.”

It is also anticipated the first Mustang will be built and prepared at DJR Team Penske’s Stapylton workshop.

“It will be built with us which is the expectation at the moment,” said Story.

“We are not going to reinvent the wheel in terms of process.

“It will be a matter of working through the development and the initial phase of production and tooling to design a car that can be used for initial testing and the homologation process.”

Eight Mustangs are expected to feature on the Supercars grid next season with Milwaukee Racing and Matt Stone Racing confirming an intention to field cars alongside DJRTP and Tickford Racing.