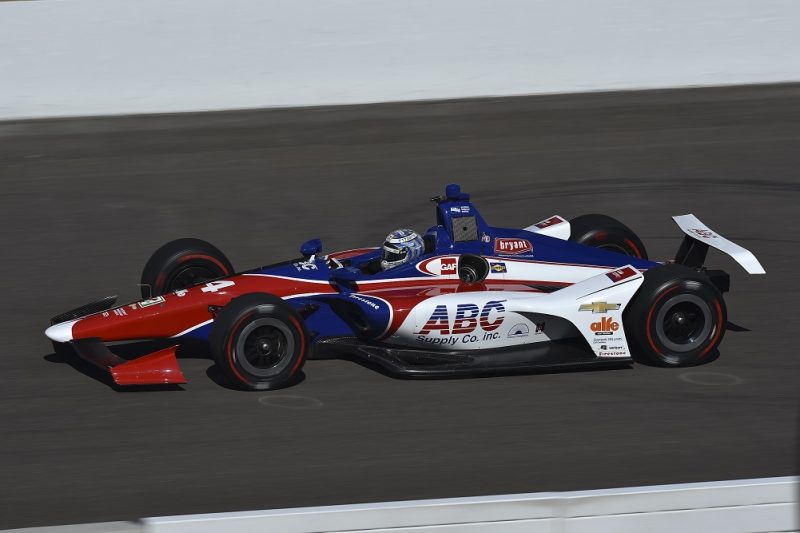 Tony Kanaan has set the pace in outright and non-tow terms in the open day of IndyCar testing at Indianapolis Motor Speedway.

Scott Dixon (#9 Chip Ganassi Honda) ended up fifth-fastest and Helio Castroneves (#3 Team Penske Chevrolet) 10th as he prepares for his two starts this year on Indianapolis’ road course and in the 500.

Will Power (#12 Team Penske Chevrolet) finished the day 12th on the timesheets.

The test gave teams the opportunity to come to terms with the characteristics of the new aero kit on the 2.5mi circuit.

“I think it was pretty smooth,” said Kanaan.

“You saw everybody came up to speed pretty fast, which is pretty remarkable, in my opinion.

“To me, it was a lot quicker down the straightaways, which was quite fun. It was like back in the day.

“You definitely feel the speed going down the straightaway. You have to hang on into the corners. A little bit different, to be honest, but fun.”

The day ended with Josef Newgarden going out on track to test the aeroscreen which made its first appearance since February’s Phoenix pre-season test.

“It was fascinating,” said the #1 Team Penske Chevrolet driver.

“It was totally different for an open-wheel car. You’re not used to having a windscreen that big in front of you, but it was interesting to try it out.

“The most interesting thing to me was the visor changes (on his helmet). Going from a fully smoke visor to a clear visor was better. It helped with the visibility and the clarity.

“There’s small improvements to be made, especially with the clarity with the visors and the perception to see through it.

“It was easy to make it work, I didn’t have any major issues with it, and I think IndyCar did a nice job.”

There is no deadline for when the aeroscreen may be implemented, with development set to continue.

The three-day program at Indianapolis continues on Tuesday (local time) with rookie orientation and veteran refreshers, including for Danica Patrick ahead of her final race.