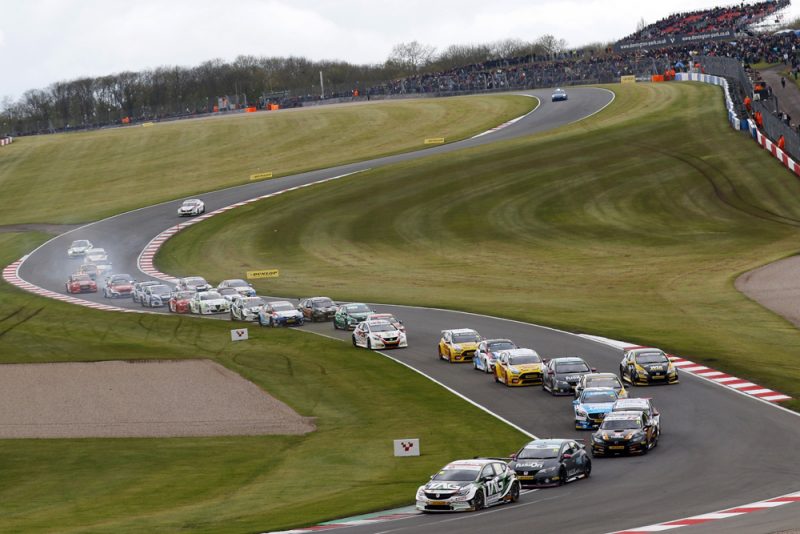 Josh Cook, Tom Ingram, and Adam Morgan shared the three races at Donington Park for the second round of the 2018 British Touring Car Championship.

It was Cook’s first success in the category, starting off the front row before going on to win the opening 16-lap race by more than three seconds from Dan Cammish.

Championship leader Ingram moved from 13th on the grid to win Race 2, chasing down early leader Cammish before struggling for grip as the race wore on.

Cammish fell to fourth at the flag, behind Ingram, Chris Smiley and Jack Goff.

The final race of the weekend went to Adam Morgan, who held off Cook in the longer, 19-lap affair.

Both last year’s championship winner Ash Sutton and Morgan moved to the head of affairs on the opening lap before a multi-car crash in the field saw the Safety Car deployed.

A move from Morgan at the final chicane following the restart demoted Sutton, who quickly became embroiled in the battling back behind.

Cook found his way through to second and Aiden Moffat third at the flag, Sutton having dropped to sixth.

Ingram now leads the championship after the first six races, holding a seven point advantage over Morgan and Cook eight points further back. 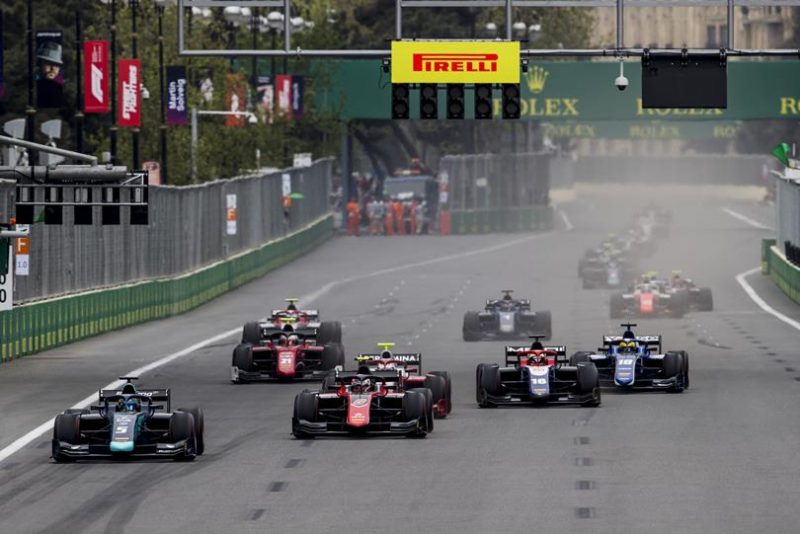 Albon was forced to work his way through Russell, Nyck de Vries, and Roy Nissany, who’d all undercut the early leader by stopping a lap earlier in Saturday’s race.

Russell was extending a lead out front before a Safety Car bunched the field after Nissany found the wall at Turn 4.

A chaotic restart ensued with Russell, de Vries and Albon all running wide at Turn 1, allowing Antonio Fuoco through to the lead.

On lap 25 Albon moved beyond Fuoco to remain the lead, holding it to the flag to claim his maiden Formula 2 victory.

Having dropped from the lead to 12th on Saturday, Russell carved his way back through the field to take his first win in the series.

The Englishman moved into the lead with five laps remaining, having taken the place from Sergio Sette Camara, but was forced to immediately relinquish it at the following corner.

Russell though continued to fight, using DRS to complete the move which would see him first across the line.

Sette Camara held on for second but was hit with a post-race penalty after officials deemed the car did not have sufficient fuel for a scrutineering sample to be taken.

It saw Sette Camara excluded from the race, promoting de Vries to second and Latifi to third.

Round 3 of the Formula 2 Championship will be held in Barcelona on May 11-13. 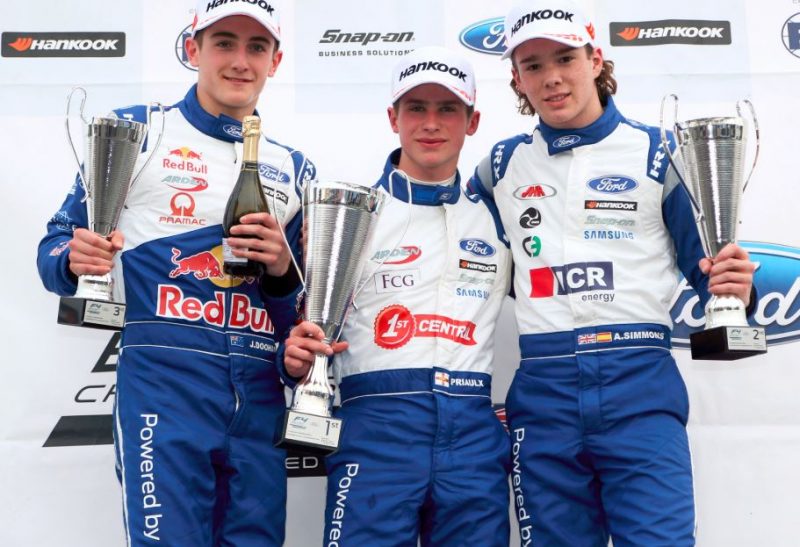 Australian youngster Jack Doohan recorded a third and two fourths at Round 2 of the British Formula 4 Championship at Donington Park.

Doohan raced his way to a podium in the opening race of the weekend, before narrowly missing out in both races on Sunday.

The performance was though enough to see him take the round in the Rookie class, and leads those standings over Josh Skelton.

Jonathan Hoggard led from start to finish to claim the opening race of the weekend, surviving a Safety Car for contact back in the pack to head Sebastian Priaulx and Doohan.

Race 2 of the weekend went to Kiern Jewiss after a storming drive from the rear of the field.

Jewiss had been the cause of the Race 1 Safety Car, but charged to sixth on the opening lap of Race 2.

He then powered on to fourth two laps later before moving around Hampus Ericsson at Coppice.

In second was Ayrton Simmons ahead of Dennis Hauger.

Hoggard then repeated his Race 1 efforts with victory in Race 3, moving clear of a four way scrap for second that included Doohan.

Patrik Pasma emerged best from that pack, ahead of Race 2 winner Jewiss and Doohan in fourth.

Round 3 of the British Formula 4 Championship heads to Thruxton on May 19-20. 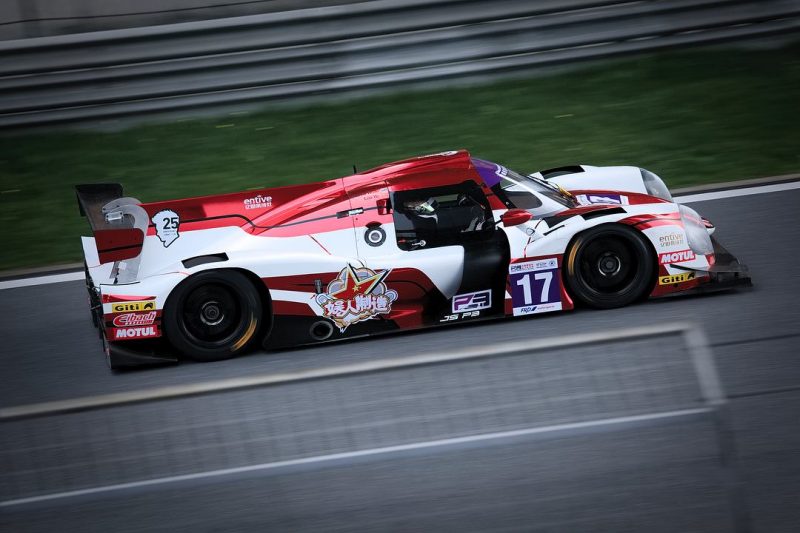 New Zealander Andrew Waite and Ye Hongli won the Feature Race while Tasmanian Josh Burdon and Nigel Moore took out the Opening Race in Round 1 of the China Endurance Series.

Hongli put the #17 PTRS entry on pole for the hour-long Feature at the Shanghai International Circuit and they led 26 of 28 laps, with the other two coming during the pit stops cycle.

Burdon was actually third across the line in the Opening Race but with four cars hit with 20-second penalties for false starts, including the two in front of him, the #25 PTRS was ultimately classified in first position.

As Burdon/Moore did in the Feature Race, Waite/Hongli finished the Opening Race in third position. 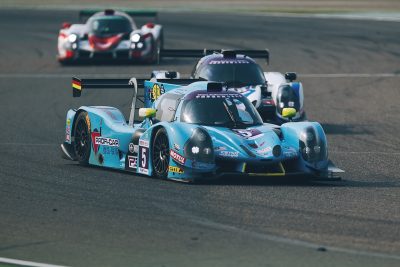 The Tim Macrow/Tim Zimmermann #5 S&D car was second across the line in both races with the penalty putting them back to fifth in the Opening Race.

Garnet Patterson/Cao Hongwei were fourth in both races after their penalty cost the #3 Eurasia car a win.

Round 2 is at the Ningbo International Circuit on May 26-27. 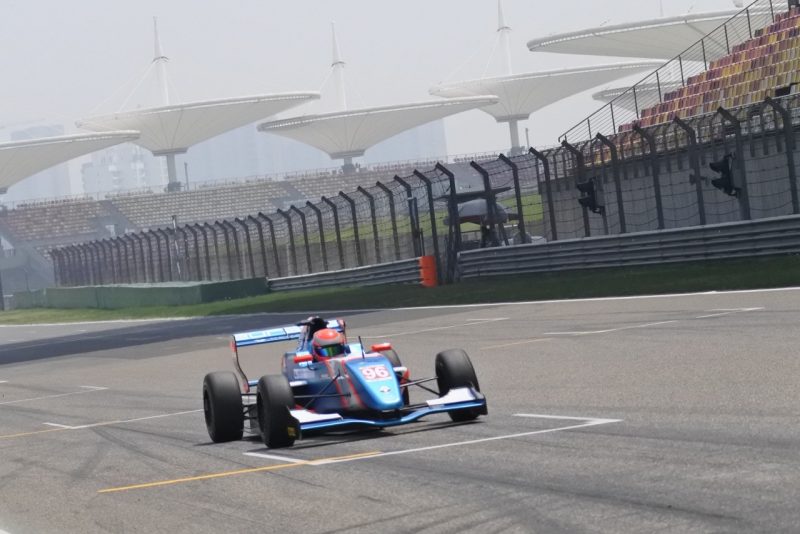 Kurt Hill has finished sixth and third in the two races which made up Round 2 of Asian Formula Renault Series at Shanghai.

Hill, driving with the Eurasia team, started Race 1 from sixth on the grid and ran fifth until the last lap, when he was passed by Antolin Gonzalez.

The Sydneysider was fourth on the grid for Race 2 but maintained third position all the way to the end of the 15th and final lap.

“The Shanghai event progressed really well, right through practice to the final race, and our momentum flowed better than ever,” said Hill.

“I was able to keep building with each session and maximise what I had out on the track, leading to another third place.

“It could have been higher but for some incidents during the race, but that’s the nature of racing.

“We’ll take this result and the lessons learned forward into Round 3 now.”

The series continues at Ningbo on May 26-27.