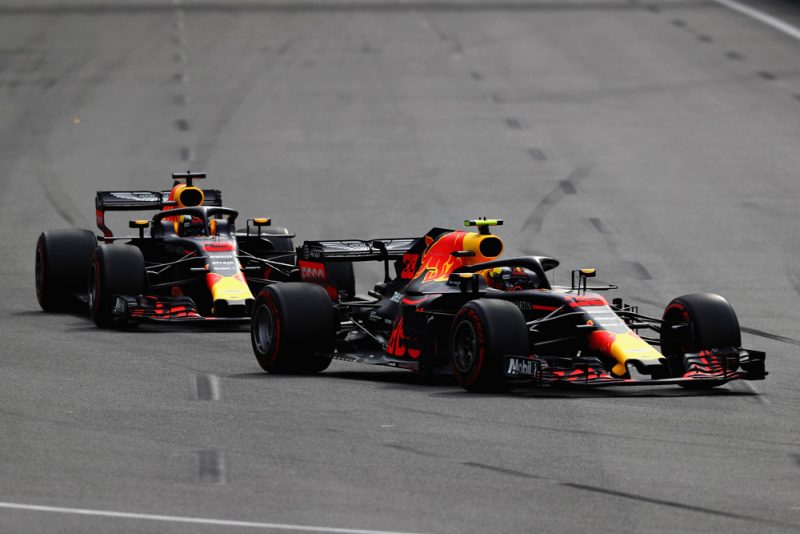 Speedcafe.com wants to know what you think of the clash that saw Red Bull drivers Daniel Ricciardo and Max Verstappen fail to finish the Formula 1 Azerbaijan Grand Prix.

The pair were eliminated from the race as Ricciardo looked to put a move on his team-mate, only to find the gap disappear as they braked for Turn 1 on Lap 40.

Publicly, the team has been careful not to point fingers at either of its drivers, with Red Bull advisor Helmut Marko labelling the clash a ‘racing incident’.

At the time, Verstappen held down fourth place, and Ricciardo fifth, a result which would have netted the team 22 points.

Red Bull Racing is currently third in the constructors’ championship with 55 points, exactly half the points of second placed Mercedes.

The collision, which ultimately ruled the pair out of the race, wasn’t the first time they’d made contact during the race.

Earlier, Ricciardo had put a move on his young Dutch team-mate at Turn 1, only to run slightly wide and allow Verstappen to cross back underneath, the pair banging wheels in the process.

As a team, Red Bull has famously employed team orders in the past.

At the 2013 Malaysian Grand Prix it issued its ‘Multi-21’ command, instructing then driver Sebastian Vettel to remain behind team-mate Mark Webber.

It was an instruction which was ignored at the time, with the German going on to controversially win the race.

Elsewhere, team orders have been used at Ferrari, with Felipe Massa moved aside for Fernando Alonso in Germany in 2010.

The practice is common up and down the pit lane, as teams attempt to maximise a result and avoid on-track incidents between team-mates, which is regarded as the ultimate motorsport sin.

In Baku, Verstappen headed Ricciardo for much of the race.

When the Australian did find a way through he was unable to extend a gap, and Verstappen managed to repass at the end of the long front straight soon after.

The pair had also dropped off those ahead, making their squabble a private one with little to be gained over rival teams.

Nonetheless, the Red Bull pairing found themselves engaged in a frenetic battle for fourth place, banging wheels and ultimately ending the race in retirement.

It was a disastrous outcome for the team, which left Azerbaijan without any points, two damaged race cars, and a pair of drivers who will face the factory to apologise to the team in person.

Speedcafe.com now wants to know what you think should have happened in this week’s Pirtek Poll.

Should the Red Bull pit wall have issued team orders to protect the result, or were they right to let their drivers race? Have your say below.