Horner: Both Red Bull drivers at fault for Baku crash

Horner: Both Red Bull drivers at fault for Baku crash 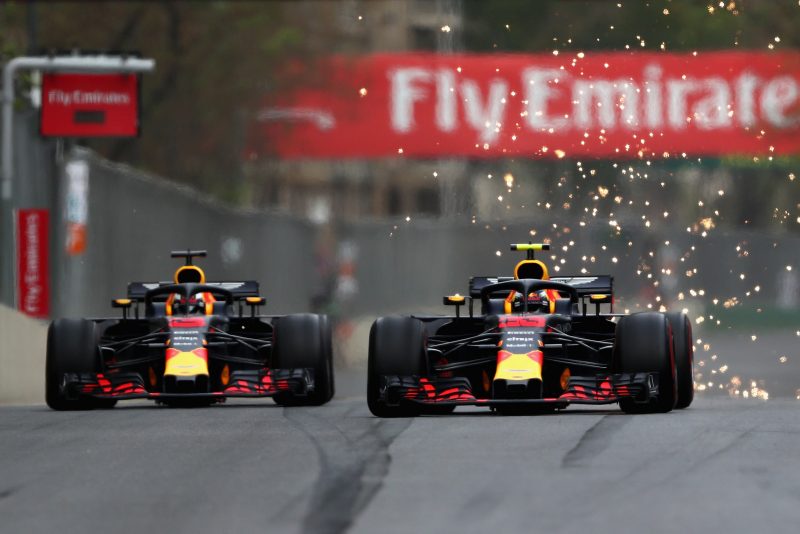 Red Bull Racing boss Christian Horner says both Daniel Ricciardo and Max Verstappen were equally to blame for a costly crash in the Azerbaijan Grand Prix.

The Red Bull duo collided on lap 40 of the race when Ricciardo attempted to pass Verstappen on the run to Turn 1, which resulted in a double retirement.

Ricciardo dived to the inside on the start/finish straight but hit the rear of Verstappen who tried to defend his fourth position.

The incident arrived after a race long battle that produced two earlier moments of contact between the pair while fighting for position.

Both drivers have shown remorse following the clash and were reminded of the expected code of conduct in races by the team in a post-race debrief.

“I’m not apportioning blame one way or the other,” Horner told Sky Sports F1.

“They are both to blame with this and it is the team that unfortunately misses out.”

Horner revealed that his drivers will be ordered to apologise to every member of the Red Bull team before the Spanish Grand Prix.

“The drivers drive for a team and they both recognise that they’ve screwed up today and will be apologising to the team and all members of the team,” he said.

“We allow them to race, we allow them to go wheel to wheel. We discussed in the pre-race meetings about giving each other space and this was the culmination of two guys taking things into their own hands which shouldn’t have happened.

“There was probably three incidents between the two of them during the grand prix. They’ve touched wheels earlier, been told to calm it down a bit, but we don’t want to interfere in letting them go wheel to wheel.

“They’ve been very good at that up to this point. We’ve always said give each other room on track and we’ll let you race. They’d just about done that during the race up to that unfortunate incident.

“In Barcelona they’ll be fine. I have no doubt about that. They are both in the dog house, you can see that in their body language and they will be in the factory to apologise to all the staff prior to the Barcelona race.”

The Red Bull boss says the squad intends to allows its drivers to continue to race each other, but only if they show respect to the team and each other.

“Our intention is to continue to let them race but they have got to show the team and each other respect and give space,” Horner added.

“They have been reminded that they are part of a team and they have a responsibility in the role they perform, they are highly paid individuals, to act with the team’s interests at heart not just their own.

“The message was delivered very clearly.”

The FIA has reprimanded both drivers following an investigation into the incident that deemed the team-mates to be equally at fault.

“Both drivers contributed to the collision,” read a statement from the stewards.

“The driver of car 33 (Verstappen) made two moves, both of which were relatively minor.

“The driver of car 3 (Ricciardo) admitted he left his move to overtake on the left, too late.

“It was obvious to the stewards that although the incident had its origins in the moves by car 33, the driver of car 3 also contributed to the incident.

“Both drivers expressed regret about their respective contributions to the incident, during the Stewards’ hearing.”