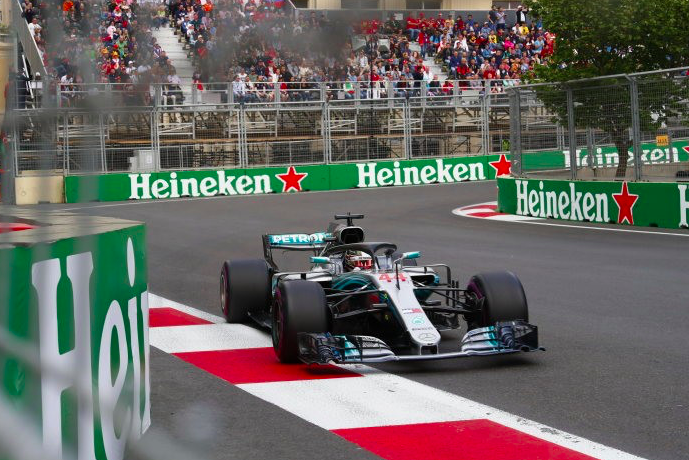 Lewis Hamilton claimed his first win of the season after taking advantage of a dramatic finish in Azerbaijan that saw race contenders Valtteri Bottas and Sebastian Vettel hit trouble and the Red Bulls collide.

Hamilton, who held third for the majority of the race, scored an unlikely victory from Kimi Raikkonen and Force India’s Sergio Perez after a crazy end to the Azerbaijan Grand Prix, triggered by a late Safety Car.

Bottas appeared set to win before a puncture robbed him of victory, handing Hamilton the lead, after the Brit took second when long time leader Vettel ran wide while attempting an audacious pass on Bottas a lap earlier.

Vettel found himself behind Bottas after the Finn took advantage of the Safety Car to pit and emerge in the race lead.

The complexion of the race changed on lap 40 when the Red Bulls of Max Verstappen and Daniel Ricciardo collided while fighting over fourth spot. 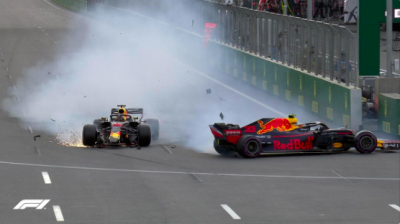 A race long dice between the pair, which produced contact in the early laps, boiled over in the final 15 laps when a collision on the start/finish straight put the pair out of the race, prompting a late Safety Car.

Both armed with fresh ultrasoft tyres after a pit stop, Ricciardo made contact with the rear of Verstappen, who moved to the inside to defend the position at the braking zone of Turn 1.

The Safety Car played into the hands of Bottas, who took his mandatory stop under the stoppage, switching to the faster ultrasoft tyres.

Vettel, who had already pitted, made a second and also chose to fit ultrasoft tyres.

Racing resumed with only four laps remaining after the stoppage was lengthened by Romain Grosjean (Haas F1), who crashed out under the Safety Car, when he lost control and found the wall while trying to warm up his tyres.

Bottas made a strong restart but Vettel dived underneath the Finn in attempt to take the lead, but he locked his front wheels and ran too deep.

Bottas’ retirement, after the puncture caused by debris, gifted Raikkonen, who was involved in an opening lap crash with Esteban Ocon, second position.

Perez, who copped a five second penalty for an earlier Safety Car infringement, claimed third after an impressive surge in the second half of the race.

Vettel, who led from pole up until his first stop on lap 32, dropped to fourth after struggling with his flat spotted tyres in the final two laps.

It proved to be a frantic start with racing only lasting until Turn 3 when the Safety Car was deployed for two separate incidents.

Raikkonen attempted to pass Ocon into the tight left hander but the Frenchman elected to squeeze the Finn, which resulted in contact that put Ocon into the wall.

Just metres behind, Sergey Sirtokin made contact with McLaren’s Fernando Alonso on the run to the corner.

Alonso picked up punctures to his right front and rear and subsequently crawled to the pits, while Sirotkin’s Williams was forced out of the race on the spot.

Raikkonen was among a group divers to take service in the pits as the Ferrari crew fitted a new front wing and soft compound tyres.

Vettel held the advantage from Hamilton and Bottas at the restart but there was plenty of action behind in the battle for fourth.

A bold move from Verstappen saw the Dutchman pass Ricciardo at Turn 2, which also allowed the ultrasoft shod Renault of Carlos Sainz to leap ahead of the Australian.

Both Red Bulls appeared to suffer from battery charging issues, which contributed in a drop off in pace, while Sainz and his Renault team-mate Nico Hulkenberg, also on ultrasofts, continued their charge.

Sainz managed to pass Verstappen for fourth while Hulkenberg, who started 14th, soon found himself in fifth.

However, Hulkenberg’s race unravelled on lap 11 when he lost the rear and found the wall, which forced him out of the race.

All eyes then turned to a battle for fifth between the Red Bulls that saw Ricciardo and Verstappen touch wheels while disputing the position at Turn 1.

The dice continued through the opening stint with the pair briefly swapping positions for fourth once Sainz stopped for soft tyres.

Ricciardo appeared to be the faster of the duo but was unable to make a move stick until lap 35 when he completed a slick move at Turn 1.

It was short-lived as he rejoined behind Verstappen after the pit stops before the pair were involved in a controversial collision later in the race.

While Hamilton capitalised on issues for Bottas and Vettel to take the victory, Sainz Jnr came home in fifth.

An impressive drive from Charles Leclerc (Sauber) saw the rookie score his maiden F1 points finish in sixth, ahead of Alonso (McLaren) despite suffering damage to the floor of his car earlier in the race.

Perez, Stroll and Kevin Magnussen were summoned to the stewards for an improper use of DRS post-race, which put their results in doubt.

Meanwhile, Sirotkin was handed a three-place grid drop and two penalty points on his licence for his role in the opening lap crash with Alonso.

Hamilton holds a four point lead over Vettel ahead of the Spanish Grand Prix from May 11-13.