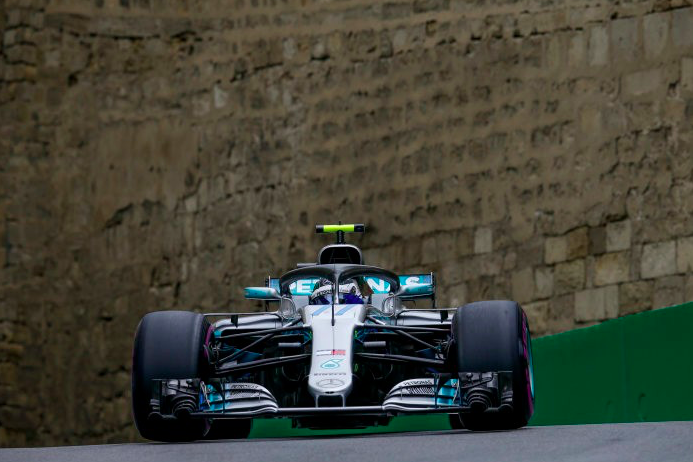 Valtteri Bottas was robbed of victory in Baku

Lewis Hamilton conceded that his Mercedes team-mate Valtteri Bottas should have been standing on the top step of the podium at the Azerbaijan Grand Prix.

Hamilton scored an unlikely first win of the season following a chaotic finish in Baku that saw leader Bottas and contender Sebastian Vettel hit trouble in the dying laps.

Bottas appeared on course to win before a puncture caused by debris on lap 48 of 51, prompted a retirement, handing Hamilton the lead and ultimately the win.

Hamilton spent the majority of the race in third spot and only moved into contention when Vettel ran wide at Turn 1 while trying to wrestle the lead from Bottas after a late Safety Car restart.

“It was really quite an emotional race to be honest,” said Hamilton.

“Valtteri did such an exceptional job and really deserved to have the win, also Sebastian did a great job.

“It feels a little bit odd to be up here, but I’ve got to take it. I didn’t give up, I kept pushing but an untidy race for me.”

Speaking after the race, Bottas admitted he was unaware he had run over debris in the final laps.

“I think this track is difficult, street circuits in general with a lot of crashes will always be an issue, this time (it) was so unlucky.

“I had no idea at any point that I ran over any debris, I didn’t see anything, I didn’t feel anything, so I was just very, very unlucky.

“It felt (like) a good race to then, safety car restart everything was under control.

“I could pull a bit of a gap, then this happened – I just had no idea that I run over some debris, can’t say much more.

“It felt like last couple of races have been quite close that (Mercedes) are winning, good thing for us as a team Lewis won, good points, but for myself, yeah… try again in two weeks.

“I will get through it – of course you always need to get through difficulties, it is part of racing although at the moment it is very painful.”

Meanwhile, Vettel, who led the majority of the race, revealed he had no regrets for trying a move to pass Bottas for the lead.

The Ferrari driver flat spotted his tyres while trying to make the pass stick that contributed to him dropping to fourth behind team-mate Kimi Raikkonen and Force India’s Sergio Perez at the finish.

“I don’t think it was overly optimistic to jump down the inside. I wasn’t overly late, otherwise I don’t make the corner at all, but I did make it, just.

“I didn’t have any option – Lewis (Hamilton) was on the right so I can’t close on him. Valtteri was ahead of me, he left a gap. I was surprised, judging the braking was very difficult.

“It’s easy to say it didn’t work, so it is the wrong thing, but I had to try.

“We can’t let one or two seconds from the race have a shame on all the race, because there are a lot of positives.”

Vettel is now four points behind Hamilton in the championship standings.