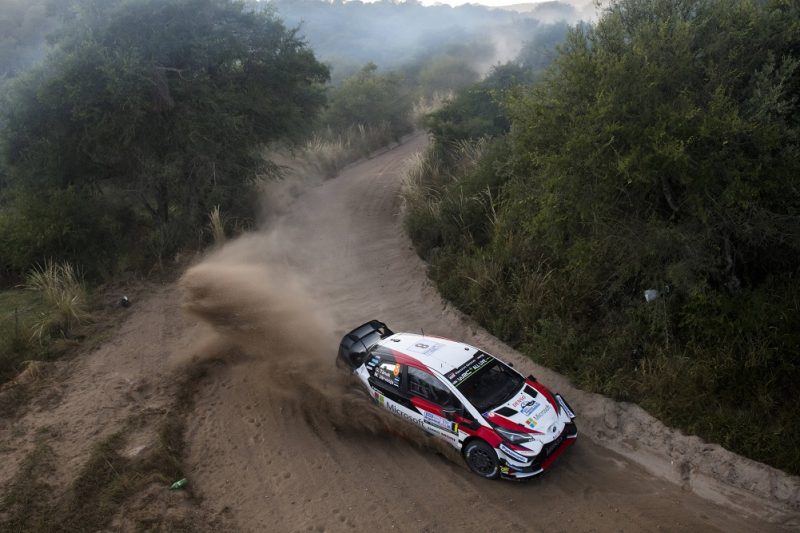 Ott Tanak has doubled his overall lead in Rally Argentina having won five of the seven stages on the penultimate day of Round 5 of the World Rally Championship.

The Toyota Gazoo driver led by 22.7s after Friday but will now take a 46.5s lead into the final day as Hyundai pair Thierry Neuville and Dani Sordo moved up to second and third respectively.

On morning of thick fog, Tanak won all three stages of the opening loop of the day, and the first two stages when it was repeated in the afternoon.

He finished fourth on the final stage of the day with power steering problems and a damaged right-front shock absorber on his Yaris.

“That was really hard. The oil leaked out of the damper and I lost the use of the power steering before it came back,” said Tanak.

“I didn’t feel like I was pushing so much today. I had a great feeling with the car, which was going so well, so why not to enjoy it?”

Kris Meeke started the day in second position and sat third when the Citroen driver had to change a puncture on the final stage of the day, leaving him eighth overall.

His team-mate Craig Breen fared even worse when he rolled on Special Stage 11 from Cuchilla Nevada to Rio Pintos, retiring with a damaged rollcage.

Neuville won the theme park Super Special Stage 12 and has a 21.7s advantage over team-mate Sordo, who claimed the final stage of the day.

Those two Hyundai drivers have a strong hold on the podium with fourth-placed Sebastien Ogier (M-Sport Ford) a significant margin further back, having been very conservative in the fog.

Lappi had lost time on Special Stage 11 when he spun off due to a pace note error from co-driver Janne Ferm, losing a position to Evans which he eventually regained on SS15.

The final day starts tonight at 2208 AEST with three more stages adding up to 55.27km of competitive running, including the El Condor Power Stage.