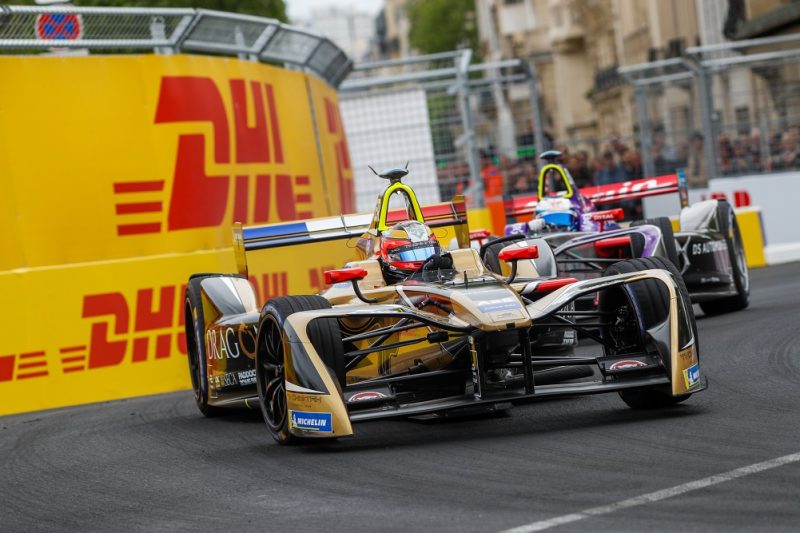 Jean-Eric Vergne has extended his Formula E championship lead with victory in Paris while Sam Bird finished third with a wheel barely hanging off his car.

Lucas di Grassi was second to the home town winner Vergne while Bird had shunted a slow-moving Andre Lotterer in sight of the finish line.

Vergne qualified his Techeetah on pole and led Bird (DS Virgin) and Lotterer off the grid.

They ran together until all pitted at the end of Lap 24 of 49, resuming in the same positions in their second cars.

Lotterer fired down the inside of Bird on Lap 35, making contact on his way past but managing to stay off the outside wall and take over second position.

Di Grassi (Audi Sport) closed in as a result and passed Bird on the following lap before applying pressure to Lotterer.

The attack caused Lotterer to use up all of his energy before the final lap of the race was out, at which time he slowed dramatically.

Di Grassi went past the stricken Techeetah as did Bird, and while the latter did not do so cleanly he managed to limp across the finish line.

Lotterer was subsequently issued a 10-position grid penalty for the next race of the season after stewards found that the German had moved back onto the race line to initiate the crash.

Mitch Evans started last due to a 10-position grid penalty before the weekend started for having to change a gearbox in one of his Panasonic Jaguars.

The New Zealander qualified 14th and therefore had to serve a five-second hold during his car change to make up the balance of the penalty, ultimately finishing 15th.